The ECB updated its monetary policy strategy for the first time in 18 years in July 2021. Therein, the ECB announced that it is willing to accept a transitory period of moderate inflation overshoot in its efforts to push inflation upwards after a long period of undershooting its target. This study explores whether such an overshoot can be economically justified employing a simple Phillips curve model. The results point to the conclusion that the average inflation rate over the business cycle consolidated about one percentage point below the ECB’s target rate. A temporary asymmetry of the ECB’s monetary strategy seems therefore justified to realign inflation and inflation expectations with the target rate.

To maintain the symmetry of its inflation target, the Governing Council recognises the importance of taking into account the implications of the effective lower bound. In particular, when the economy is close to the lower bound, this requires especially forceful or persistent monetary policy measures to avoid negative deviations from the inflation target becoming entrenched. This may also imply a transitory period in which inflation is moderately above target. (ECB, 2021a)

The European Central Bank (ECB) updated its monetary policy strategy for the first time in 18 years in July 2021. Most notably, its inflation target was set to exactly 2% annual increase of the Harmonised Index of Consumer Prices (HICP) over the medium run instead of the former definition of “below but close to 2%”.1 While this change appears to be of a merely semantic nature, the ECB further announced that it is willing to accept a transitory period of moderate inflation overshoot in its efforts to push inflation upwards after a long period of undershooting its inflation target. This willingness was later reiterated in a press conference by ECB President Christine Lagarde (ECB, 2021b). The ECB also announced that it will include the costs of owner-occupied housing in its inflation measure in order to better represent the inflation rate that is relevant for households (ECB, 2021a).

In order to measure the extent to which the ECB missed its target in the aftermath of the financial crisis, one can compare the development of the actual HICP level since 2009 with a counterfactual in which the ECB had exactly hit its former target, which is set at 1.9% annual inflation rate (Figure 1). This comparison shows that the ECB stayed close to an ideal path until 2013 but significantly deviated from it since then. In particular in 2014, 2015, 2016 and 2020 the actual inflation rate in the euro area barely avoided entering deflationary territory. In 2020, the actual HICP level was 8.4 percentage points below the ideal HICP level. Considering that the ECB deployed unprecedented measures to push inflation back on track, e.g. zero to negative policy rates, quantitative easing and forward guidance, this result is sobering but may well have avoided an even greater deviation from its inflation target. 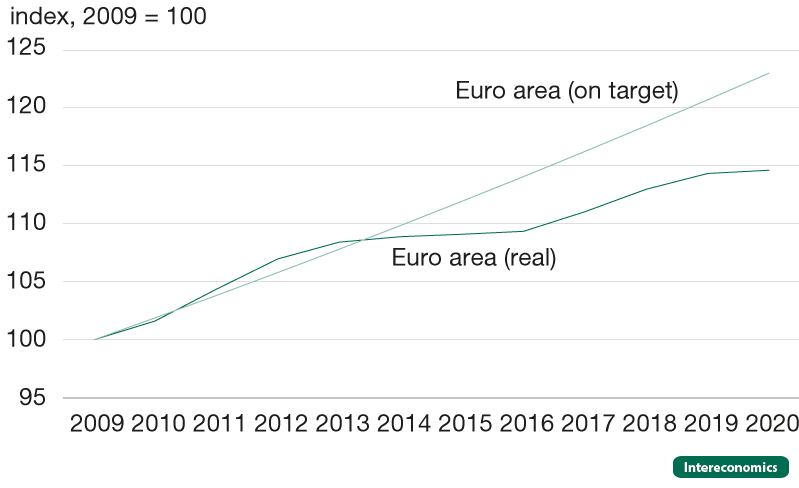 Even though the ECB stressed the symmetry of its inflation target, i.e. tackling over- and undershoots equally, the willingness to accept a temporary overshoot, even for a transitory period, can be criticised as asymmetric (Reuters, 2021). Given that the HICP level considerably deviated from an ideal trajectory, one can argue that a temporary overshoot merely brings the price level back on track. However, that ignores the main underlying macroeconomic source of low inflation, the under-utilisation of production capacities. According to the estimates of the European Commission, the average output gap of the euro area between 2014 and 2020 was -1.2%, beginning with -2.5% in 2014, peaking at +1.3% in 2019 and ending with a staggering -5.9% in 2020, due to the pandemic-induced recession.

Building on Hennecke (2018), the relationship between inflation and the capacity utilisation can be modelled and estimated using the significant heterogeneity of inflation rates and capacity utilisation of the 19 Economic and Monetary Union (EMU) member states between 2014 and 2020. Equation (1) formally states this simple Phillips curve in a linear fashion, where ∆ π denotes the deviation of the actual inflation rate in percent of country i in year t from the inflation target, c the constant term, β the slope parameter, y ̃  the output gap in percent of the production potential and as an alternative measure of the unemployment gap in percentage points and ε the error term. The unemployment gap is calculated as the difference between the non-accelerating wage rate of unemployment (NAWRU) and the actual unemployment rate. For inflation, the year-over-year change in the headline HICP in percent is used, obtained from Eurostat; for the output gap and the NAWRU estimates, data from the European Commission are used, collected from their AMECO online database from which the data of actual unemployment rates was gathered as well.2

This model has the advantage that the constant term yields the average deviation of the inflation over the business cycle, since the output gap as well as the unemployment gap should average out to zero. Hence, the estimated constant term should not significantly deviate from zero if the ECB meets its target.

The regression results with the output gap as a measure of capacity utilisation are shown in Figure 2 and Table 1. The Breusch-Pagan test for heterogeneity rejects the null hypothesis of homogeneity and therefore rejects the pooled OLS model. Hence, unobserved heterogeneity needs to be taken into account which is done in model 2 by including country-specific random effects. Modelling time-specific random effects (model 3) or both country- and time-specific random effects (model 4) does not increase the quality of the model as the adjusted R² decreases considerably. Hence, model 2 provides the best fit to the data. 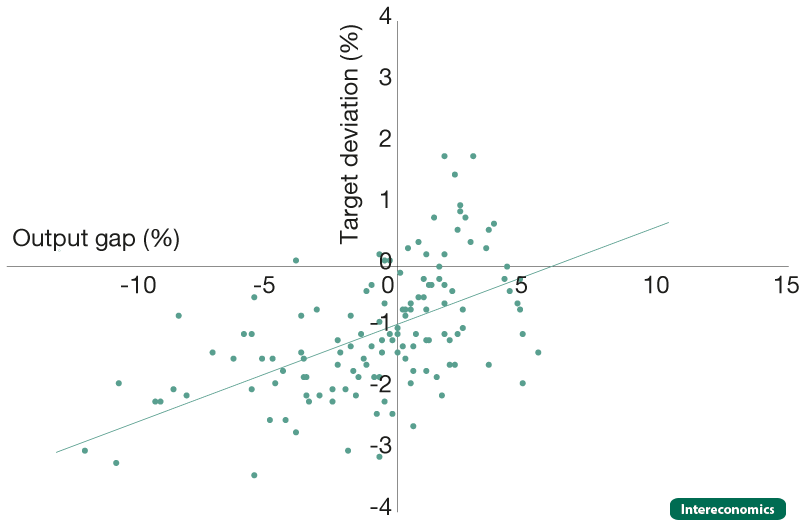 When the unemployment gap as a measure of capacity utilisation is used instead (Figure 3 and Table 2), the Breusch-Pagan test for heterogeneity does not reject the null hypothesis of homogeneity. Hence, unobserved heterogeneity does not need to be taken into account. For robustness checks, random effects models were estimated nonetheless (models 3, 4 and 5). Comparing the models’ adjusted coefficient of determination also shows that the pooled model is preferable. 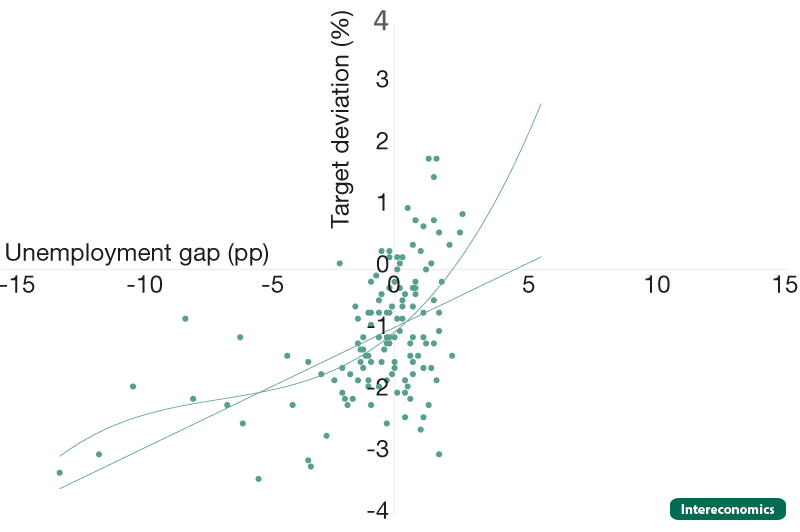 Regardless of the measure of capacity utilisation, the regression results indicate that there is a statistically significant relationship between the HICP inflation rate and the capacity utilisation of the real economy. With a one percentage point increase in the output gap, inflation picks up by 0.17 percentage points or by 0.2 percentage points for the unemployment gap. More interesting for the purpose of this study is that the constant term is significantly below zero in all models. Thus, over the course of a full business cycle, the ECB undershoots its inflation target by about one percentage point.3 Or put differently, in order to meet its new target of exactly 2% annual inflation rate, the output gap would have to be at +5.5% and the unemployment gap at +4.7 percentage points. Given that the models are linear and the relationship is expected to turn non-linear, the more the output gap exceeds zero and positive feedbacks arise, the greater the chance that the 2% target rate would in reality probably be met at a much lower positive gap, as demonstrated by model 2 with the unemployment gap as a measure of capacity utilisation. Nonetheless, all models indicate a systemic undershoot of inflation as the linear model is probably a good approximation around an output or unemployment gap of zero.

In light of these results, the ECB’s announcement of a temporary acceptance of an inflation overshoot seems justified and can be seen as an attempt to avoid a further loss of credibility and a stabilisation of inflation and inflation expectations below the ECB’s target. The latest ECB Survey of Professional Forecasters conducted in the third quarter of 2021, which can be seen as a proxy of wider inflation expectations, already yielded higher inflation forecasts for all horizons. In particular, the inflation rate for 2021 is expected to be almost on target with 1.9%, up by 0.4 percentage points compared to the previous survey one quarter earlier and before the ECB’s announcement. However, the main reasons are increased energy prices, a better growth outlook and the current supply shortages in some markets (ECB, 2021c). The revised monetary strategy most likely did not play a substantial role yet.

Whether the ECB’s updated strategy is successful in elevating inflation back to target – and realigns expectations with it – remains to be seen. For the next two years, the forecasters expect inflation rates of merely 1.5%. For the longer term, i.e. 2026, the surveyed forecasters expect inflation to be at 1.8%, and therefore seem anchored near the target rate (ECB, 2021c). In any case, the ECB is likely to back up its announcement with action, as long as the inflation remains below its target and a period of inaction, as soon as inflation exceeds its target. Hence, low to negative policy rates and considerable asset purchases, with all their potential side effects, are probably here to stay for the foreseeable future. What might help the ECB to bridge some of the inflation gap are its plans to gradually incorporate the costs of owner-occupied housing in its inflation measure. Gros (2018) estimated that the inclusion of the costs of owner-occupied housing could increase measured inflation by 0.5 percentage points, i.e. about half of the shortfall identified in this study. However, the ECB (2016) itself calculated the impact with a mark-up of merely 0.2 percentage points.

* Data used in this article are available at https://journaldata.zbw.eu/journals/about/intereconomics.

ECB (2021c, 23 July), Results of the ECB Survey of Professional Forecasters in the third quarter of 2021, Press release.

Gros, D. (2018), Persistent low inflation in the euro area: Mismeasurement rather than a cause for concern?, Monetary Dialogue, February 2018.