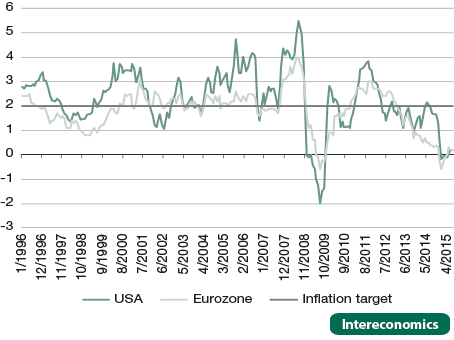 Of course, one major driver of this global disinflationary process is the remarkable reduction in the prices of oil and other important raw materials. However, there has been a decline not only in headline inflation but also in core inflation, which excludes energy and food (1.1 per cent in October 2015 in the eurozone). Despite a slight increase in core inflation compared to the first half of 2015 (0.6 per cent), the ongoing decline in the oil price affects the overall price structure and price level in the eurozone (due to the trickle-down effect via relative prices and wage negotiations). However, central banks do not like the core inflation concept due to its insufficient transparency.

All in all, it seems that central banks are experiencing difficulties in reaching their inflation targets. Contrary to the past, it is not high inflation causing central bankers headaches but inflation rates which seem to be stuck at low values with a tendency towards deflation. Realising that the conventional inflation measures overstate the ongoing increase of the price level by 0.5-1.0 percentage points, central banks decided to fix the inflation target not close to zero but close to two percent, thereby incorporating a safety margin to guard against deflationary risks. Even in times of “normal” inflation, i.e. in line with the inflation target, studies show that a target above one per cent should be adequate in this sense.1

The determinants of inflation can be deduced from the aggregate supply relationship as it is given in Galí 2 and De Grauwe:3

where πt is the current rate of inflation, πt-1 is the inflation rate in the previous period, π* is the central bank’s inflation target, Etπt+1 is the expected inflation rate in the next period, yt is the output gap and εt is the aggregate supply shock. According to this equation, inflation will exceed its long-term target value if, ceteris paribus, at least one of the following conditions is met:

Currently, none of these conditions are met. On the contrary, the US and eurozone inflation rates have remained below their target values since March 2013.

Finally, there were positive aggregate supply shocks due to declining oil prices. West Texas Intermediate crude oil reached $105.79 per barrel at its recent peak in June 2014 but has since depreciated to $42.87 per barrel as of August 2015 (see Figure 2). 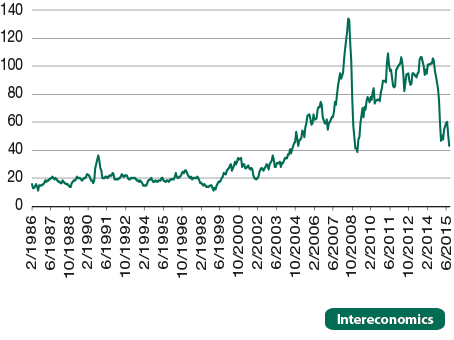 Although several factors can lead to low inflation, the question arises why central banks’ large-scale asset purchases and ultra-low interest rates have contributed so little to inflation dynamics and been unable to stem the risks of deflation.

One explanation could be that monetary policy is not expansionary enough, although policy rates are near zero and central banks’ balance sheets are larger than ever. Another explanation could be that monetary policy instruments have recently lost their power to affect inflation. A third explanation, known as the Neo-Fisherian theory, claims that inflation is low because interest rates are low and that inflation will rise only when central banks begin to target higher policy rates.4

The Neo-Fisherian theory turns Irving Fisher’s theory of interest rates, which explains movements in interest rates by movements in expected inflation, on its head by reversing the standard inflation-to-interest rates causality, claiming instead that the causality runs from interest rates to inflation. In simple words, this theory states that monetary policy cannot move the equilibrium real interest rate, which is the interest rate that would prevail under full employment and stable prices. Thus, under higher central bank interest rates, inflation is the only economic variable that can help to restore the long-run economic equilibrium, at least as long as sovereign debt is sustainable. The rationale behind this theoretical result is that forward-looking economic agents deduce a low inflation target from a prolonged period of low central bank interest rates, which leads to low inflation expectations and consequently materialises in low inflation.5 This theoretical result, however, stands in contrast to the efforts of the Federal Reserve and the ECB trying to reach their unchanged explicit inflation targets while policy rates are stuck at the zero lower bound and inflation expectations worsen. 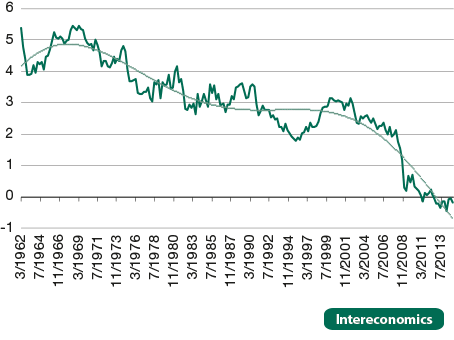 Although neglected by academic research during the time of the “Great Moderation”, the equilibrium real interest rate is again attracting attention from academics.11 As a level factor, it has important implications for monetary policy, since it defines the average interest rate level of the economy, which can be a constraint to monetary policy at the zero lower bound for nominal interest rates.

Figure 4
Trends in US interest rates and inflation

From Figure 5 we can infer that the median real interest rate on long-term bonds as well as the 25 per cent and 75 per cent quantiles are declining for the industrialised economies, indicating that declining real interest rates and the zero lower bound problem for monetary policy are not exceptional to the US and the eurozone and will possibly become a problem for many other countries. Estimates by the Bank of England economists Rachel and Smith show that the global real interest rate declined by four percentage points in the last 25 years to a value close to zero, mostly due to increasing global savings and declining global investments.12 Summers13 and Weizsäcker14 predicted this development based on the demographics of ageing societies. This has an impact on the trend of productivity as well as on the dominant time preference in society. When future needs become not only more important but also more valued, then a close-to-zero real interest rate is in line with the traditional theory of interest.15 Another factor is the changing role of emerging markets due to lower investment activity and the savings glut. 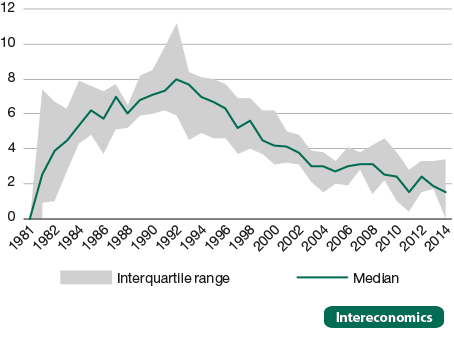 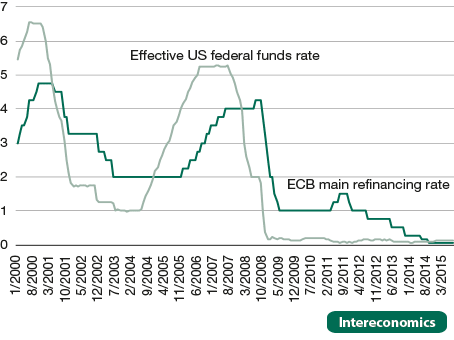 The zero lower bound problem can be seen from the aggregate demand relationship as given in Galí16 and De Grauwe:17

In the case of a negative equilibrium real interest rate, worsening inflation expectations can be sufficient for aggregate demand to fall.19

When we move from a partial equilibrium analysis to a general equilibrium analysis, we come to the result that a low or even negative equilibrium real interest rate as well as a binding zero lower bound for the central bank’s policy rate lead the public to expect that the central bank has lost control over aggregate demand and thus inflation, which leads the public to expect deflation. Deflationary expectations worsen aggregate demand, which will materialise in actual deflation. Eggertson and Woodford suggested that central banks have to stabilise inflation expectations when their policy rates hit the zero lower bound.20 The ECB’s survey of professional forecasters revealed expected inflation rates of only 1.3 per cent for 2016 and only 1.6 per cent for 2017. Although the public’s inflation outlook improved after the ECB started its large-scale asset purchase programme in the beginning of 2015, inflation expectations improved too little, causing the ECB to announce increases in the volume and the length of its programme, if necessary, at its press conference in September 2015.

That leads us to the question of how the real interest rate could be increased. Since monetary policy cannot move the equilibrium real interest rate, it is structural policies that are needed here. Policy makers have to address the determinants of the real interest rate, like productivity, demographic trends and low infrastructure investment. Up to now, it seems that economic policy lacks a convincing answer to this challenge. We see surprisingly low productivity figures despite the global trend towards digitisation, which is supposed to provide a boost to productivity. Furthermore, the ageing in industrialised countries is no longer counterbalanced by the emerging economies because of severe economic problems and governance deficiencies in the latter (middle-income trap). Therefore, the hypothesis is not unfounded that the real interest rate restriction will affect monetary policy for a longer time.