The OECD database for structural analysis (STAN database) and the French national accounts system (INSEE) are used to analyse 30 sectors of the French economy (manufacturing, energy, construction, market services and public administration) over the period 1978-2015.4 The markups are estimated for each of the 30 sectors for seven periods with an average five-year duration, which provides 210 estimated markups. Seven periods are considered: the 1st period (1978-1984), the 2nd period (1985-1989), the 3rd period (1990-1994), the 4th period (1995-1999), the 5th period (2000-2004), the 6th period (2005-2009) and the 7th period (2010-2015). Each period’s duration derives from a trade-off between the accuracy of the markup estimations and the number of periods that provides the largest number of observations. Indeed, longer periods improve the accuracy of markup estimations but reduce the number of periods and thus, the number of observations. The compound annual growth rate of hourly labour productivity is computed for each of the seven periods.

As a first approach, the relationship between competition and productivity growth can be represented by a scatter plot of the sector markups and the compound annual growth rate of hourly labour productivity during the seven periods running from 1978 to 2015 (Figure 1). The scatter plot shows 210 points (30 sectors observed during the seven periods), and each point on the figure represents a sector observed during each of the seven specific periods. 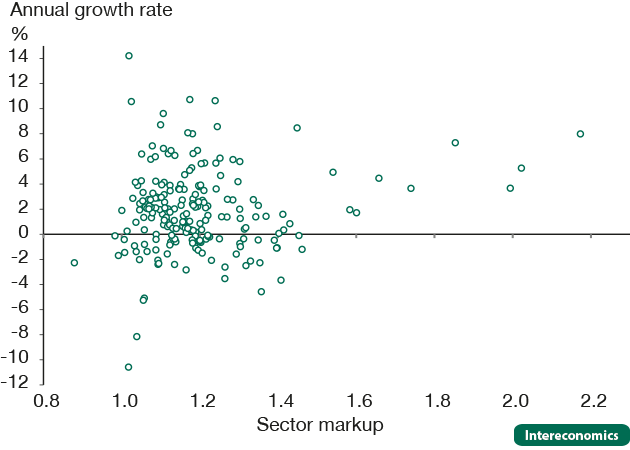 At first glance, the scatter plot does not provide any obvious or robust result regarding the link between competition and productivity growth. However, by grouping sectors according to their level of technical progress, it appears that an inverted U-shaped relationship actually characterises the effect of markups on the rate of hourly labour productivity growth (Figure 2). This graph suggests that the relationship between competition intensity and labour productivity growth may vary across sectors subject to their specific rate of technical progress. Hence, markups over marginal costs or perfect competition prices could be related to sector-specific characteristics, meaning that higher markups do not necessarily imply the existence of static monopoly rents. 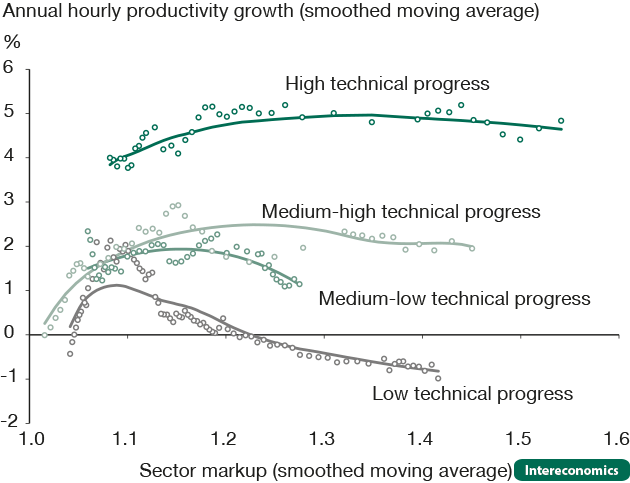 Figure 2 provides a scatter plot of four smoothed moving averages. Each curve represents a set of sectors grouped according to their technical progress rate. The smoothed moving average is computed as follows: a point defined by markup xi and annual productivity growth yi , denoted (xi , yi ), is shifted to point (Xi , Yj ) following:

The optimal levels of markup in each of the 30 sectors are obtained by estimating an econometric model based on a quadratic function. This specification allows for the estimation of the effect of variations in the markups on the rate of labour productivity growth for each sector. A dummy variable is associated with the squared markup term, which allows the estimated coefficient to vary across sectors. The following Equation (1)

is estimated where i ∈ {1, 2, ..., 30} is the index of the sector, p ∈ {1, 2, ..., 7} is the index of the period, CAGRprodip is the compound annual growth rate of production at current prices of sector i, markupip is the estimated markup for sector i and intbub is a dummy variable that captures the impact of the Internet bubble, which might have affected the information technology sectors during the fifth period (2000-2004). During the fifth period, intbub = 1 (intbub = 0 otherwise) for each sector in the information technology category, which includes ‘Computer, electronic and optical products’, ‘Publishing, audio-visual and broadcasting activities’, and ‘Telecommunications; IT and other information services’. In this equation, the individual (sector) fixed effects have been removed to avoid interactions with the dummy indicator. The term di represents the dummy indicator of sector i, dp is a period fixed effect, β is the coefficient of the markup that is common to all sectors, αi is the coefficient of the squared markup specific to sector i, c is a constant and εip is the residual. The optimal markup for sector i is then determined by the following term:

As a result, the corresponding maximum level of hourly productivity growth is defined by

Figure 3 represents the correlation between the optimal markup and the average rate of technical progress (denoted θg) for each sector. 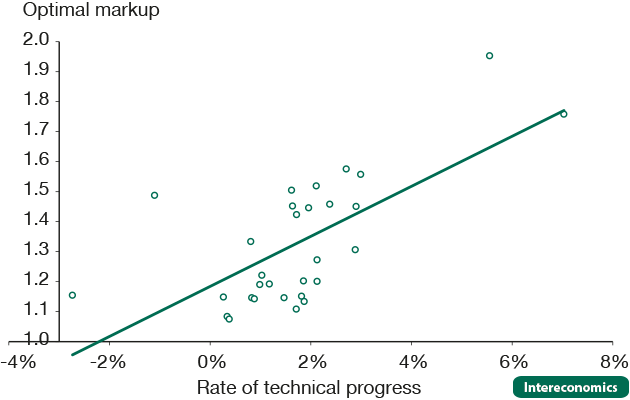 Indeed, labour productivity growth reflects improvements in production techniques, which require investment. Markups have two contrary effects on investment. On the one hand, they tend to reduce investment, in line with the ‘escape competition’ effect. On the other hand, they tend to increase investment, in line with the Schumpeterian effect. The markup that maximises investment reflects an underlying trade-off between those two effects in each sector. As the productivity impact of technical progress occurs through investment, a higher rate of technical progress strengthens the Schumpeterian effect more than the ‘escape competition’ effect. As a result, the trade-off in a sector with a higher rate of technical progress tends to shift towards higher markups (Jeanjean, 2020).

The Internet bubble may have increased productivity growth in the information technology sector during the fifth period (2000-2004) independently of the markup levels. This effect can be corrected with the dummy variable intbub, introduced in Equation (1). The term Δmarkupip may be either positive or negative depending on the period. The absolute value of the difference between the actual and the optimal level of markup in each sector allows to analsye the impact of the distance from these sector-specific optimal markups on the growth rate of labour productivity, irrespective of the sign of the difference. The equation is estimated for first differences of the dependent variable, i.e. the hourly labour productivity growth rate. 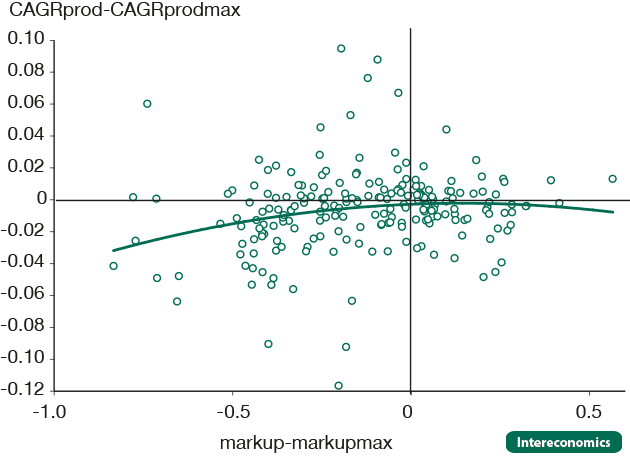 Differences between actual and optimal levels of markups entail losses in labour productivity growth. It is possible to estimate the average annual labour productivity growth that is lost due to unsuitable markup levels in each sector between 1978 and 2015. First, it is necessary to compute the mean of the differences between observed markups and optimal markups. However, as these differences may be positive in some periods and negative in others, it is necessary to compute the first differences in absolute values: 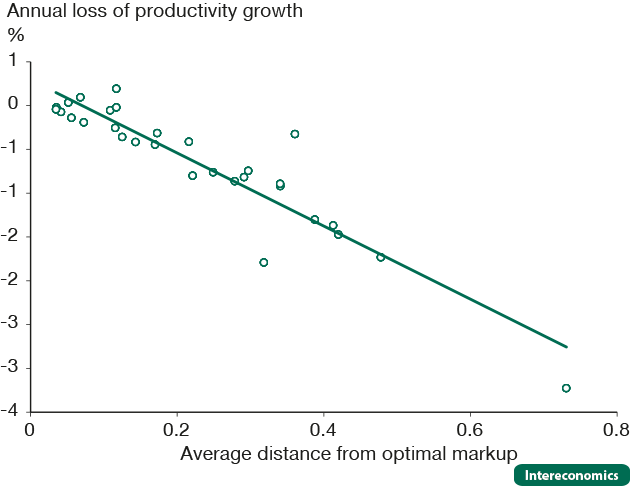 The average annual loss of productivity growth due to unsuitable markups in the French economy over the period 1978-2015 is estimated at 0.4% (with an average difference of 0.152 from the optimal markup). As the average annual growth rate of French labour productivity was 1.86% over the period, such growth could have reached 2.25% had markups been at their optimal levels.

Public debate on competition policy is currently addressing concerns about how competition policies should adapt to the digital transformation of the economy, driven by the development of algorithms and data in all industries. Our research advocates that the assessment of competition intensity should take into account the technological progress measured in each sector. In digital sectors, specifically, the rate of innovation is high, and the trend of productivity growth is essentially driven by investment in technologies (dynamic efficiency) rather than price competition, which hinders markups above perfectly competitive prices (static efficiency; Jeanjean, 2015; Houngbonon and Jeanjean, 2016). In such sectors, higher prices do not necessarily reflect higher monopoly rents, and higher markups may reflect the expected return on risky investment in innovation (Ciriani and Lebourges, 2016).

Competition policies that aim at lowering prices to marginal costs (i.e. eliminating market power) could shift competition intensity beyond its optimal level and thus impede the expected profit margins necessary to sustain current and future investments in innovation. In sectors with a high innovation rate, investments in technologies may be curtailed due to markups below the optimal level. Moreover, reduced investment in technologies in these sectors should also have a negative impact on other sectors.

* The views expressed do not necessarily reflect those of the institutions with which the authors are affiliated.

Arrow, K. J. (1962), Economic Welfare and the Allocation of Resources of Innovative Activity, in National Bureau of Economic Research, The Rate and Direction of Inventive Activity: Economic and Social Factors, 609-626, Princeton University Press.

Roeger, W. (1995), Can imperfect competition explain the difference between primal and dual productivity measures?, Estimates for US manufacturing, Journal of Political Economy, 103(2),316-330.