A Secular Decline in Capital Productivity in G7 Countries

There is a commonly held notion that higher fixed investment allows one to have it all – a higher labour productivity, a higher wage growth and higher or at least sustained returns on capital. However, experience shows that capital accumulation has led to a decline in total capital productivity with resulting pressures on capital returns – which have been largely offset by keeping wage growth subdued. This suggests that more policy focus should instead be placed on investment aimed at boosting total factor productivity through innovation and diffusion of technological progress so that gains in productivity and remuneration may be felt by both labour and capital.

In contrast to the ongoing debates on labour productivity, capital productivity has generally not received a lot of attention. Although the two concepts are highly interrelated, they are also quite different. Labour productivity, which measures output per working hour and is an important determinant of standards of living, typically rises alongside fixed investment. Capital productivity, which measures output per capital services,1 or simply output per quality-adjusted capital stock, is in turn a key driving force for savings, investment and economic development. Given that the scarcest input is by its very nature most productive, there is some trade-off between the two productivity measures. That said, capital and labour productivity can rise in tandem if there is an improvement in total factor productivity (TFP). Higher TFP implies a higher efficiency of the overall production process, allowing a higher level of output for given levels of labour and capital.

Ignoring prices, overall real capital productivity2 in G7 economies has declined markedly over the past three decades, with only a brief period of improvement during the economic boom of 2003-07 and more recently in the aftermath of the global financial crisis (Figure 1). 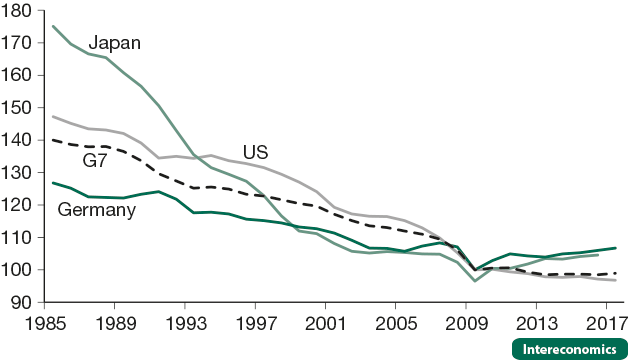 This secular decline in capital productivity is also apparent across major non-financial market industries, especially in construction and non-financial business services, but also in manufacturing (Figure 2).3 It is only the information and communication (IC) sector that showed a long-run uptrend. The worst performing sub-industries have been retail within trade and nondurable goods within manufacturing. In contrast, capital productivity in durable goods manufacturing has turned around in the 2000s showing an uptrend thereafter, while the intermediate goods sector has shown relative stability. 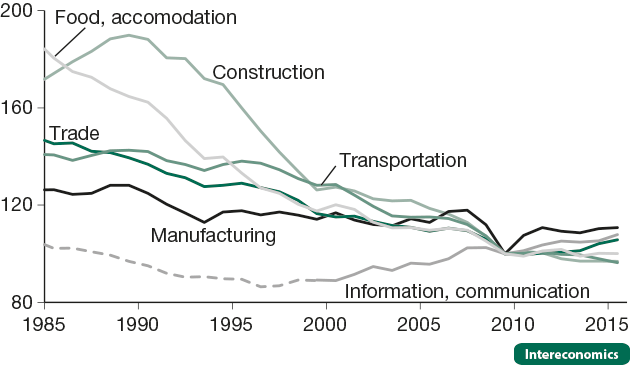 Note: After 1998 information and communication (IC) consists of (i) publishing, audiovisual and broadcasting activities; (ii) telecommunications; (iii) IT and other information services. Before 1998, as the dashed line indicates, IC composition varied across countries, but predominantly consisted of post and telecommunications, e.g. IC included postal services in the US until 1998 and in Germany until 1991, which afterwards has been included in the transportation sector.

Why does capital productivity fall as investment picks up? First, investment booms often result in some capacity underutilisation. This may reflect temporary factors such as the need for additional investment during a gradual buildup of large projects or the need for resource reorganisation and training. But some effects, such as inelastic total demand, are more lasting. For example, building more supermarkets or hotels in a neighbourhood may not lead to a proportionate increase in the overall demand. Also, the rise in new technology-led businesses has reduced the appeal for goods and services produced by old industries, e.g. while digitisation has brought about capital-efficient e-commerce, it has left spare capacity in high street retailers. External forces, such as increased foreign competition, have also negatively affected demand, both domestic and external, in some sectors.

But even if new fixed investment is utilised to full capacity, the law of diminishing marginal returns implies that, at industry level, raising capital per workforce eventually leads to a lower marginal and average capital productivity, all else equal. This is directly linked to the decreasing marginal product of capital in many industries, i.e. each extra unit of capital tends to generate less output, all else equal. Providing an employee with a second laptop does not necessarily increase his output, for example. Moreover, this extra output per extra capital is highest when capital stock is relatively low. In other words, the scarcer the capital, the higher the capital productivity. That is why some of the most attractive investment opportunities are often found in less developed countries. Similarly, according to the famous Solow model, accumulation of capital alone cannot yield lasting economic progress. TFP growth is the ultimate driver of economic growth and productivity of both labour and capital.

Growth accounting, based on EU KLEMS data, allows for the measurement of the contribution to economic growth from quality-adjusted capital, skill-adjusted labour and technological change. By extension, a change in capital productivity can be illustrated as the sum of a positive contribution from TFP growth and a negative contribution from the rise in the capital to labour ratio, called capital deepening (Figure 3).4 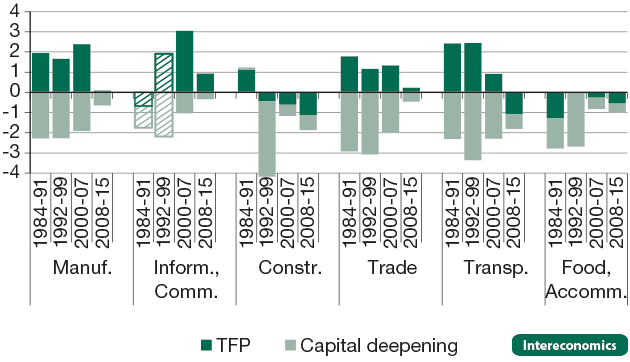 Over the past decades, capital in G7 economies has become increasingly more abundant relative to labour,6 reflecting a more rapid accumulation of capital relative to growth in employment, and, in some cases, even a decline in employment. In some sectors, employment, measured as hours worked, fell alongside diminishing output, but the widespread decline in manufacturing employment (since the 1970s in European countries and since the early 2000s in the US) contrasted the continued increase in gross value added, suggesting that labour automation has played a role. This has changed post-crisis, as capital deepening in G7 economies stalled. 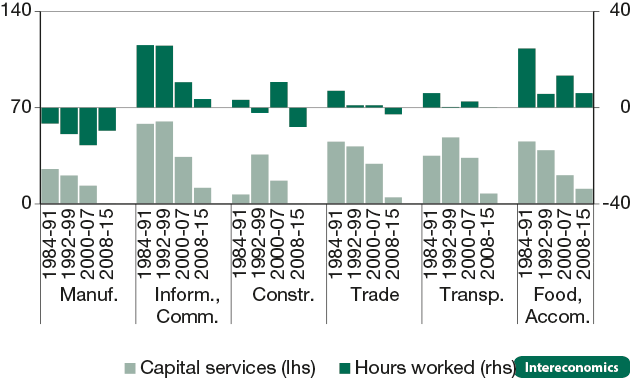 While employment recovery was particularly weak in manufacturing, construction and trade in the five G7 countries under consideration (in 2015 it was still below 2007 level), the recovery was even shallower in investment, with quality-adjusted capital stock barely rising in the eight years until 2015 across all six sectors (see Figure 4).

Despite the recent pause, there are reasons to expect that capital deepening will likely resume in the years ahead:

But there are also reasons to believe that capital deepening will not resume the pace of the 1980s or 1990s:

While a return in capital deepening will be a welcome development for labour productivity, pressures on capital productivity will resurface, especially if TFP growth remains subdued.

Higher investment: A cause or a symptom of TFP growth?

Contrary to some beliefs, higher fixed investment is generally not a solution to weak TFP growth,8 and in fact, may act as a drag on TFP in the short run due to negative effects of the (temporary) underutilisation of newly invested capital. But then, why do investment growth and TFP growth show a high correlation over the longer run? In the G7 countries, for example, the correlation between TFP growth and investment growth was 0.8 over the 1980-2017 period. An explanation is that investment and TFP are both pro-cyclical: they tend to rise in economic upswings and decrease in economic downturns. In expansionary periods, such as in the years 2003-07, booming demand conditions encourage investment and boost TFP via improved aggregate capacity utilisation of labour and capital. Likewise, the sharp ensuing recession after the global financial crisis left sizeable spare capacity and little business’ appetite for new capital outlays. The role of demand can be illustrated by the US example: the correlation between fixed investment growth and non-adjusted TFP growth in the US over the period 1985-2017 was 0.6, but only 0.2 when using a capacity-adjusted TFP series (Figure 5).

Figure 5
Fixed investment and TFP in the US 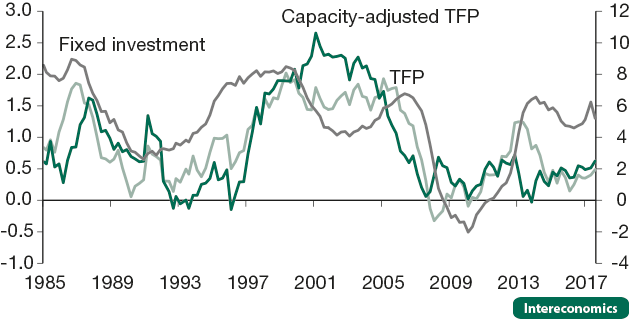 Sometimes, economic and investment booms originate from positive shocks to (capacity-adjusted) TFP itself. In the past, such positive TFP shocks resulted from new business models and production processes (e.g. assembly lines, outsourcing), technological advancements (e.g. the Internet, personal computer), regulatory environment changes (e.g. reforms increasing efficiency and competition in product and labour markets), among other factors. These forces have been observed to drive growth of output, incomes and investment. For example, economic acceleration in the new EU accession countries in the mid-2000s or East Germany in the 1990s after the fall of the Berlin Wall were in part driven by structural reforms that focused on market liberalisation and privatisation, and a reduction of supply side bottlenecks (Figure 6). In turn, the Internet and rapid advancements in computer technology served as an engine for growth in the US during the 1990s boom. 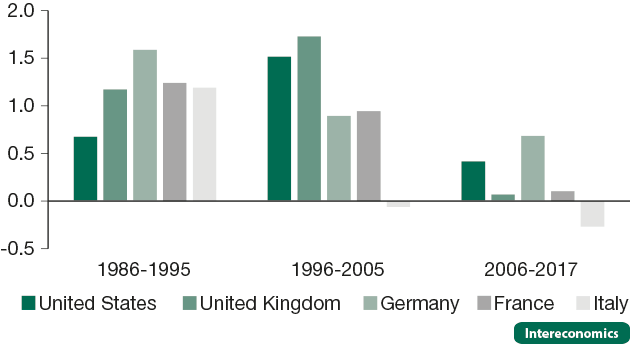 Yet certain investment, such as that in research and development (R&D) and technology-embodying capital, is not only a symptom of but also a catalyst for TFP growth. R&D is critical for stimulating the learning and innovation process, while intellectual property products and ICT capital (information technology equipment, communications equipment and software) help promote knowledge transfer, technology diffusion and efficiency spillovers across industries, including trade, transportation and manufacturing. Information and communication technologies allow companies to streamline production, distribution and administrative processes and produce superior goods and services with less resources and in less time. There is significant empirical evidence, at both the macro and micro level, that confirms positive spillovers to TFP growth arising from investment in R&D, and notably (cumulative) investment in ICT capital.9 Figure 7 and Figure 8 show that countries and sectors with the highest average TPF growth during 2002-07, notably information and communication followed by manufacturing, also had the highest levels of ICT capital intensity. 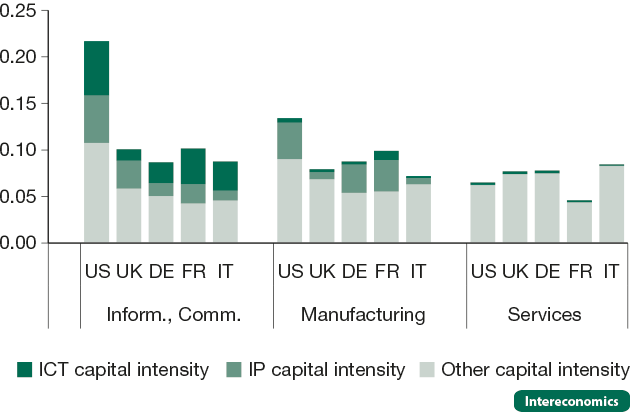 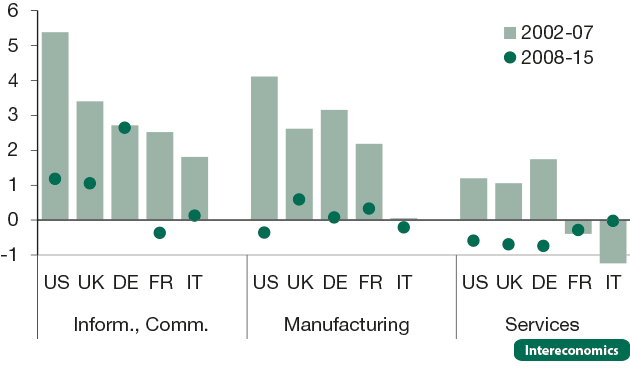 That said, post-crisis slowdown in TFP growth is visible across the five G7 countries considered, especially in the US (TFP growth in the US in 2011-17 fell to one-fourth of the 1996-2005 pace even after adjusting for utilisation), irrespective of its much higher ICT capital intensity (Figure 8). Moreover, ICT investment slowed in tandem with TPF, notably in the US, which is considered to be at the technology frontier (ICT investment growth halved from the 1990s pace), sparking a debate about the fading dividends of the Internet revolution and earlier advancements in semiconductor and hardware industries.

There are reasons to believe that there remain untapped investment opportunities in technological capital. To begin with, European countries still lag behind the US in ICT capital, suggesting sizeable potential TFP gains from investment into existing technologies. But even in the US, the evidence suggests room for further technology diffusion. The OECD finds that TFP growth remains strong within the most productive firms but the gap between the others has widened.10 Finally, recent advances in computing power, artificial intelligence and other breakthrough technologies offer hope for a new wave of technology-led productivity renaissance, albeit with time lags.11 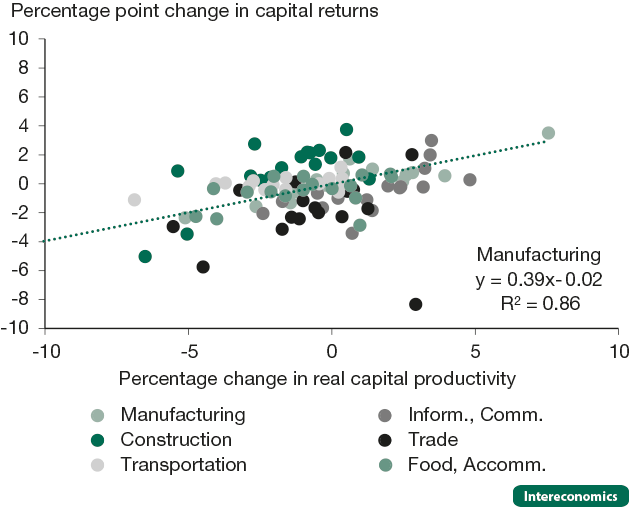 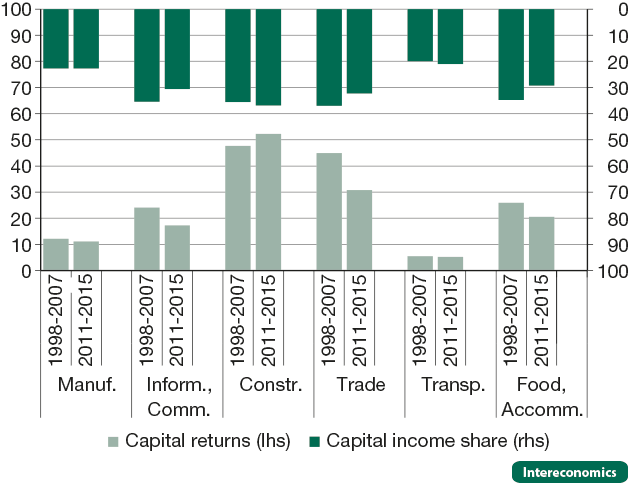 There are two possible explanations for these divergences:

This analysis answers or reformulates some of the prevailing questions in academia and media:

Focus on innovation and technological progress

While it is often argued that investment is a recipe for both higher wages and higher corporate profits, such discussions miss an important element of capital productivity. All else equal, investment does boost labour productivity, whereas rising capital intensity weighs on capital productivity and capital returns. In fact, companies managed to sustain capital returns in the past by subduing real wage growth with rising capital income shares. It is only TFP growth that allows for the increases in returns and productivity of both labour and capital. What is also missing from these discussions is the focus on investment that has the potential to boost TFP. Unlike traditional physical capital, investment in ICT capital, R&D and intellectual property products allow companies to shift to new technologies, more advanced capital and higher TFP levels.

In this context, governments should focus on policies that promote creation and diffusion of innovation and technological progress. Potential gains from investment in technology-embodying capital are particularly high in European countries, as they still lag significantly behind the US in both ICT investment flows and ICT capital stock relative to their economies. Europe should aim at creating favourable conditions for private ICT investment through tax incentives and trade policies, pro-competition reforms to product markets (notably services) and public spending on basic research and education.