This article is part of Economic Convergence or Divergence in the EU?

The joint Intereconomics/CEPS conference focused on income convergence among EU countries and within specific countries like Germany and Italy. I would like to first caution about overinterpreting these results and then look at other divergences within the Eurozone, which I regard as much more important.

There seems to be a widespread belief that income per capita should converge across countries. This is indeed what the Solow model predicts. It is also what the Commission’s study “One market, one money” focused on ahead of the launch of the euro.1 However, the Solow result is based on a number of strong assumptions. One of them is that the financial markets are integrated. Assuming that the creation of the euro, in and by itself, would lead to financial integration, “One market, one money” promised convergence. That promise was broken. Not only has financial integration not been achieved, but there are several other assumptions that are not satisfied in the Eurozone or in the wider world.

Looking at labour productivity and income per capita, Figure 1 illustrates how elusive convergence is. The left part of Figure 1 shows that Japan started to close the gap with the US but then convergence stalled. While the level of income per capita in Germany converged to that of the US in the 1980s, it then diverged. Italy and the US never converged. However, as can be seen in the right part of Figure 1, Italy and Germany converged with the US in labour productivity (output per hour), then Italy diverged, but not Germany. A clear interpretation of the case of Germany is that German workers work fewer hours than their US counterparts. In the case of Italy, a number of well-known inefficiencies in the labour and goods markets have contributed to the divergence.2

Similar stories can be told for other countries,3 as well as within regions of individual countries.4 The belief, therefore, that economies or regions converge is strongly rejected. Many exceptions to the Solow model’s assumptions can be invoked, including market and policy imperfections such as national preferences for leisure, skill heterogeneities, welfare protection or the presence of powerful vested interests. And also trade theories do not predict convergence. At best, some theories predict (under strong conditions as well) factor price equalisation.

Figure 1
Non-convergence in labour productivity and income per capita 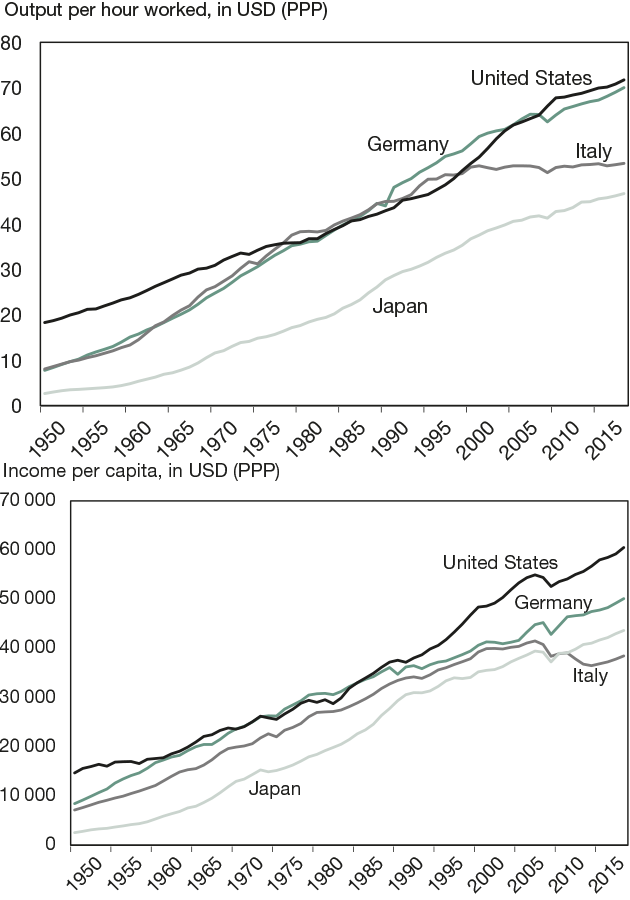 Source: University of Groningen, The Conference Board: Total Economy Database.

It is not clear either why divergence matters in the Eurozone. Convergence is not included among the criteria of the Optimum Currency Area (OCA) theory, which suggests that the Eurozone can operate without it. Furthermore, the reasons for divergence originate mostly inside member countries, usually because of institutional arrangements that reflect deep social and political preferences, most of which are national competences. Revealed preferences therefore indicate that member countries – implicitly at least – choose not to converge. The belief in the need for convergence is all the more surprising as it is not happening among citizens of the same country, region, or town. Inequality may be perceived as a source of political resentment that leads to reduced support for the euro. However, concerns about inequality predominantly arise within countries, which is where they are addressed.

Let me now focus on the monetary unions and a very different type of divergence. Since Mundell invented the Optimum Currency Areas (OCA) concept,5 we know that asymmetric shocks are the Achilles’ heel of a monetary union. Divergence, in this case, is not a long-run phenomenon, but rather reflects temporary differences in the economic conditions among member countries. Measured in terms of GDP per capita, the divergences are modest and temporary, but they may have drastic consequences such as a serious recession, a financial crisis, or both, with profound political implications. Indeed, members of a monetary union have lost the ability to use the exchange rate to cushion shocks and a common central bank faces difficulties to act as a lender of last resort. The risks are magnified when member countries operate under different economic, institutional and political conditions. This is another type of divergence, which may lead to serious difficulties. Importantly, and in contrast with long-term growth, many divergences can be remedied.

The OCA approach has highlighted ways to limit the occurrence and impact of asymmetric shocks. The theoretical short list includes price and wage flexibility, labour mobility and, possibly, collective insurance. Because public debt and weak banks open up a window of vulnerability to financial crises, measures are required to achieve fiscal discipline and strengthen bank regulation and supervision. The Eurozone crisis has shown the utmost importance of these various divergences. A welcome response has been the Banking Union. It moves responsibilities for bank supervision and regulation from the national to the European level. Yet at this stage, the third necessary pillar of the Baking Union, bank resolution, is missing. The resolution framework remains fragmented and it lacks resources, including a well-stocked resolution fund and a bank deposits guarantee scheme. The resulting divergence in the treatment of banks is a serious threat to the monetary union.

Conversely, much effort has been devoted to the reduction of macroeconomic divergences, despite the fact that this is unnecessary. The Macroeconomic Imbalance Procedure (MIP) has been introduced primarily to monitor and deal with current account imbalances. A country’s current account represents its net savings, which combines net public savings (budget surplus) and net private savings. Figure 2 shows the two components of the current account for the Eurozone countries computed as their averages over 1999-2018. The countries which have run current surpluses appear above the diagonal while those under the diagonal have run deficits. The top-right quadrant corresponds to both budget and private surpluses while countries with both deficits appear in the bottom-left quadrant. Most countries appear in the top-left quadrant, where budget deficits are compensated by net private savings, sometimes almost one-to-one (“Ricardian” cases). The cases that warrant concern are those in the bottom-left quadrant which display both budget deficits and net private dissaving. This is where three crisis countries (Cyprus, Greece and Portugal) can be found.6 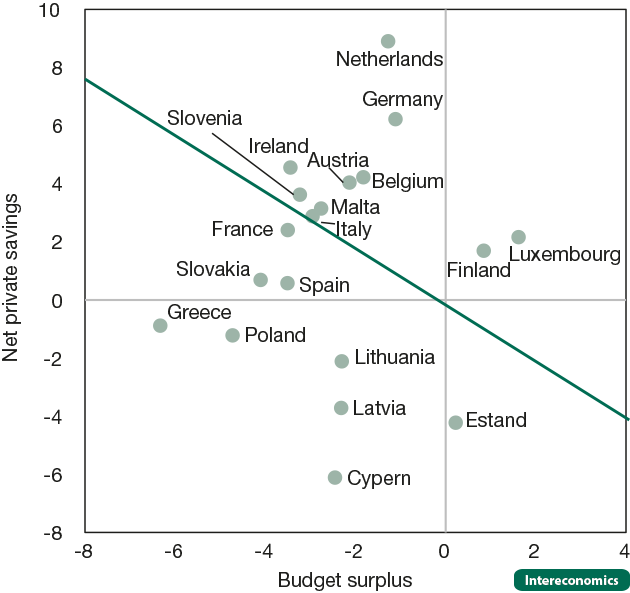 The public balance is presumably already taken care of by the Stability and Growth Pact (SGP), which obviously failed – not only in the three crisis countries. Net private savings, a feature observed in many countries, reflect individual decisions. Not only is it nearly impossible to affect these choices, but they pose no risk to the monetary union. Net private dissaving, on the other hand, may lead to financial turmoil. By construction, however, private dissaving is fully financed. Private agents, households and firms, can only spend more than they earn if they run down their assets or if they secure loans. There can be excess borrowing, which is the result of excess lending by banks or by the financial markets. The Single Supervisory Mechanism (SSM) is in charge of monitoring bank lending, so this risk is presumably taken care of. As for possible excess lending by the financial markets, the risk is borne by a myriad of investors who may suffer losses, but this does not represent a tangible macroeconomic threat. If fiscal discipline is established and banks are effectively monitored, the MIP is unnecessary. Yet, the MIP is a vast operation, which absorbs significant resources at the European Commission and which represents an infringement on national sovereignty. It would be far better to rethink fiscal discipline and complete the Banking Union. At least, it would deliver financial integration and help with income convergence.

Similarly, the European Commission monitors structural reforms and rewards them with a lenient application of the Stability and Growth Pact. It addresses divergences in productivity at the national level, which partly account for divergences in long-term growth. These divergences and the reforms needed to reduce economic inefficiencies require the vested political will to confront established interests or misguided policies inherited from the past. Why should the Commission wade into national politics? Of course, it would be better if all economies were more productive; still, this does not justify external interference. After all, if a country chooses to be poorer, it bears the consequences. There exist some externalities – e.g. through purchasing power – but the principles of fiscal federalism remind us that they should be balanced by information asymmetries, which are considerable, and by preference heterogeneities, which are also extensive. The subsidiarity principle implies that structural reforms should remain strictly national prerogatives. Mixing up reforms and the Stability and Growth Pact only weakens the latter.

Finally, a fiscal union would be a welcome complement to the monetary union. A European budget could be used to smooth business cycle divergences, as it does in federal states. To do so, however, it would have to be sizeable. This would require a “federal” taxing competence to finance “federal” spending, all of which would have to be approved by a “federal” parliament. It would represent a very significant step toward a federal Europe. No matter how desirable it is for Euro-enthusiasts, such a step is currently patently out of reach. Even a small system of European unemployment benefits, as has long been proposed, is highly controversial and difficult to set up in a way that would deliver transfers that cancel out over the business cycle.

There was a time when Europe was a distant dream. The dream has become a reality but it faces widespread hostility in nearly all member countries. One reason for this is that Europe is misused. For decades, governments approved common decisions that they knew were unpopular, only to go home and blame Europe. Using Europe as a scapegoat was politically convenient, but it would inevitably backfire; and here we are. Next, the Eurozone crisis was not supposed to happen, but it did. The scapegoat game will go on unabated as long as promises are made and not delivered, because they cannot be delivered. This is true for income convergence, which is not a necessary consequence of integration. It is also true for macroeconomic imbalances. Fiscal discipline is the responsibility of national governments and therefore beyond the reach of “Brussels”. After two decades of failures, it would seem that the time has come to replace the failed Stability and Growth Pact with a new approach.7 Curtailing bank excessive lending is now in the hands of the Banking Union, which must deliver. Europe has to stop scapegoating itself.