On the Risk of a Sovereign Debt Crisis in Italy

The intention for the Italian government to stimulate business activity via large increases in government spending is not in line with the stabilisation of the public debt ratio. Instead, if such policy were implemented, the risk of a sovereign debt crisis would be high. In this article, we analyse the capacity of the Italian economy to shoulder sovereign debt under different scenarios. We conclude that focusing on growth enhancing structural reforms, would allow for moderate increases in public expenditure.

Economic development in Italy in recent years has been characterised by a decidedly weak trend in productivity. Per-capita gross domestic product (GDP) in 2017 is just 92% of its 2007 level. In the Eurozone on the whole (including Italy), by contrast, this indicator stands at 103% of its pre-crisis level. In addition, the sovereign debt ratio rose by 30 percentage points from 100% of GDP in 2007 to 130% in 2017. Doubts thus exist as to whether Italy has the requisite economic strength to continue to service its rising sovereign debt. These doubts manifest themselves in the current yield of ten-year Italian government bonds, for example, which is three percentage points higher than the return on German government bonds.

The Italian government intends to deploy expansive fiscal policy to help the country’s economy back onto its feet. In this article, we analyse the capacity of the Italian economy to shoulder sovereign debt under different scenarios. A wide range of development is possible, depending on the assumptions made about the ways in which key factors interrelate. None of these possible outcomes, however, make a markedly expansive fiscal policy appear advisable for Italy or it would not stabilize sovereign debt. Instead, productivity enhancing structural reforms should be implemented. This would make room for moderate increases in fiscal spending.

A country’s debt ratio expresses the relation between its nominal gross debt and its nominal GDP. It is an important indicator of a country’s capacity and hence of the sustainability of public debt: if the debt ratio is low, the country can be expected to service its sovereign debt. If the debt ratio exceeds a certain threshold, repayment of sovereign debt to its creditors becomes less likely. If there is uncertainty about a government’s ability or determination to service sovereign debt, risk premiums will increase, as do the returns insisted upon by buyers of sovereign debt. Such rises in interest rates increase the issuing state’s cost of servicing debt and render repayment in full even less likely. A spiral of rising sovereign debt and rising interest rates, if taken to an extreme, can lead to insolvency. This has two consequences for our purposes here: 1) assessments of the sustainability of sovereign debt must also take expected future debt levels into consideration; 2) trends in debt levels and interest rates are mutually dependent.

The defining equation for the ratio of sovereign debt offers a point of departure for a simple formal derivation of the impact that a programme of expansive fiscal policies has on the debt ratio:

Both parameters can vary over time. Let us consider nominal total debt first: if it grows, the debt ratio increases. Sovereign debt increases if the state budget exhibits a deficit (negative budget balance). The budget balance is the difference between government expenditures and revenues, whereas the primary balance comprises the budget balance less interest payments. If a government is planning to increase government spending without corresponding savings or tax increases elsewhere, the primary deficit rises (or the primary surplus falls). Even in the absence of changes in tax revenues or primary state spending, an increase in the interest burden also leads to an increase in sovereign debt. Now turning toward nominal GDP: if this increases, the debt ratio drops. A higher nominal GDP can be the result of a higher price level or higher production. Hence, the debt ratio increases if the sum of the primary balance and interest burden is negative, if production declines or if the price level decreases.

The second key interrelation for a debt forecast is the relationship between sovereign debt and interest levels. This relationship is apt to be non-linear: an X% increase in sovereign debt does not globally trigger an increase in the risk premium on interest rates equal to Y%. Experience shows, rather, that risk premiums on sovereign debt in advanced economies are typically quite low, but that they can rise very quickly and steeply if doubts about solvency begin to emerge. The following hypothetical examples envisage scenarios involving both a continuation of the current interest rate level and a sharp increase in interest levels.

Moreover, the trend in nominal GDP, interest rates and primary balance is subject to a large number of added variables – the price of oil, for example, or business conditions in other countries. Accordingly, forecasts for trends in national economies usually enlist complex models reflecting the main interactions involved; these are models in which exogenous variables, used to derive plausible assumptions, have a role to play. The forecasts used in the baseline scenario here stem from the Joint Economic Forecast Group, the International Monetary Fund and the OECD.

The baseline scenario 1 (see Table 1) employs the latest outlooks issued by the Joint Economic Forecast Group, the International Monetary Fund and the OECD. As these forecasts extend no further into the future than the year 2023, assumptions are made for the period thereafter: we assume that the post-2023 trend in real GDP (0.40%) mirrors the average movements recorded between 2000 and 2017. We assume a rate of inflation equal to two percent. The primary-deficit forecast continues perpetuating the 2023 outlook, and we assume that the real rate of interest will hold constant beyond the period already forecasted. As the predictions featured here were generated prior to the formation of the current government in Italy, we assume that new, additional state outlays have not been factored in here. Our calculations show a debt ratio that will gradually decrease over the next 20 years to a value of 76% (see Figure 1). The projection posits annual budget surpluses that will begin in 2020. While this path is sustainable from the point of view of debt capacity, it hardly seems realistic today.

Table 1
Scenarios for the development of the Italian economy

Scenario 2 incorporates the new government’s planned economic policy. This includes a higher level of basic income, a lower retirement age and reductions in tax revenues through lower income taxes. All of this would increase the primary deficit by around 90 billion euro each year (five percent relative to nominal GDP). Accordingly, in this scenario we initially assume a primary deficit that each year is five percentage points higher than under the baseline scenario. A particularly favourable assumption is also made about the effects that additional expenditures will have on production: the entirety of added outlays will affect GDP (multiplier equal to 1). We also assume that the higher level of nominal GDP will also lead to higher tax revenues. With a public spending ratio in Italy of around 50%, we assume that every additional euro of GDP will translate into 50 cents that will be available to the state in the form of added revenue. Furthermore, we assume that the effect on GDP will dissipate over a period of five years. The increase in primary balance owing to GDP effects can thus be expected to taper off as well. Under this scenario, it can be seen that the debt ratio will subside slightly after a brief upturn – after which it will significantly and permanently increase. If a vanishing multiplier effect is assumed, the outcome expected will be a situation of sovereign debt that is no longer sustainable. 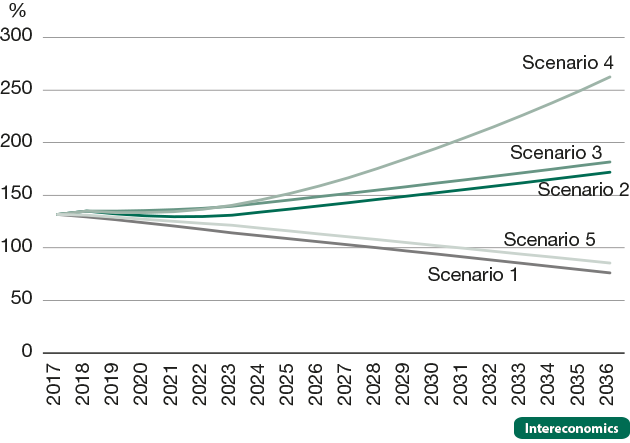 Source: Calculations by the authors based on data sources given in Table 1.

In Scenario 3, we assume a multiplier of 0.5 and employ all of the other assumptions used in Scenario 2. The forecast that results here does not even include a short-term drop in debt ratio. As public deficits under this scenario exceed five percent in the years to come, they are in serious violation of the Maastricht criteria (three percent). In light of this, it is doubtful whether creditors would be persuaded to leave risk premiums at their current levels. As risk premiums are meant to compensate for possible losses due to default, a rate of interest that exceeds a certain rate viewed as safe by two percentage points reflects an expected likelihood of two percent that the amount invested will be completely lost. If the current, already-high level of sovereign debt continues to rise unabated, then the expected likelihood of default and hence the interest rate for Italian sovereign debt are likely to be significantly higher.

With this in mind, in Scenario 4, we show the impact that a significant increase in risk premium would have on sovereign debt. We thus assume an interest rate of around seven percent – as was experienced most recently in November 2011 – and then see this holding steady in real terms. Other than this, the assumptions applied are the same as in Scenario 3. Scenario 4 illustrates very clearly that such a development would lead to a swift increase in sovereign debt and deficit. This policy certainly could not continue until the year 2036 (as shown in Figure 1), instead escalating significantly sooner into a full-blown sovereign-debt crisis.3

The discussion of Scenarios 2 to 4 highlights the unsustainability of a significant increase in public spending in Italy. As mentioned above, the critical situation of public debt is partly due to weak productivity growth, which comes with low rates of real GDP growth. The average annual growth rate of GDP in Italy between 2010 and 2017 has been just 0.4% as compared to 1.3% in the euro area (including Italy). An expedient alternative to the plans would feature structural reforms that could stimulate greater growth in productivity.4 This includes activating labour market reforms, improvements in competition law and the reduction of non-performing loans in the banking sector.5 For that reason, we assume in Scenario 5 that the Italian government implements structural reforms as proposed by the European Commission and the economy therefore experiences stronger real GDP growth. To that end, we assume that real GDP growth from 2024 onwards will be on the higher euro area level, in contrast to the lower growth path assumed in the other scenarios. Without additional government spending, the public debt ratio could shrink significantly faster than in Scenario 1. That would allow for a moderate increase in public spending. Therefore, Scenario 5 shows the impact of higher real GDP growth (1.3%) and an increase in the primary deficit of one percent in relation to GDP (multiplier: 0.5, no further increase of risk premium) on the projection of public debt.

The Italian government’s intention to stimulate business activity via large increases in government spending is not in line with the stabilisation of the debt ratio. This policy would mean a high risk of a sovereign debt crisis. Instead, it is recommended to focus on growth enhancing structural reforms, allowing for moderate increases in public expenditure.

Indeed, the European Commission has rejected the draft budgetary plan for Italy in October 2018. Though political pressure from Brussels will probably not be enough to urge the Italian government to change course, financial investors have more clout. While our simulations show that the rise in the debt burden will at first be slow, as only a small part of government bonds have to be rolled over every year, Italian banks will not be able to stand a drastic increase in government bond yields. This is because about 10% of their assets are government bonds that lose value if yields rise, and because refinancing costs for banks rise with higher government bond yields. Thus, it is the financial market that might force a change in the policy of the Italian government before long.