Brexit is not only a historical chapter of the British – EU relationship, but it also carries immense challenges for financial market stability in the short and medium run for the 28 member states of the European Union. The scale of these challenges depends heavily on the outcome of EU-UK negotiations. The European Systemic Risk Board plays a critical role in macroprudential supervision, a crucial policy challenge for the EU. However, there are doubts as to whether it will fulfill its mandate. The EU27 faces major problems in terms of prudential supervision after Brexit since a very large part of their wholesale banking markets are in the UK and thus will not be regulated by the EU after 29 March 2019. Indications point to a considerable risk of a new transatlantic banking crisis in the future.

A 2016 referendum in the United Kingdom resulted in a narrow majority in favor of what is referred to as Brexit: the departure of the UK from the European Union on 29 March 2019, after 45 years of EU membership. It is already clear, and has been emphasised at the 2018 meeting of British Prime Minister Theresa May and US President Donald Trump in Davos, that the UK and the US are working towards a British-American transatlantic trade and investment partnership agreement that is expected to help the UK to overcome the dampening effects of Brexit on long-term economic growth.

After reaching an agreement on the transitional period for Brexit in March 2018 that confirmed the UK’s continued activity in the EU single market until 2020, negotiations headed into a final stage in which future EU-UK trade relations should be framed within a sectoral free trade agreement. EU chief negotiator Michel Barnier emphasised that financial services will largely be left out of the free trade agreement.1 Thus, the UK will encounter a considerable disadvantage as it has been running a sectoral current account surplus in financial services vis-à-vis the EU27 that has partly offset its high structural current account deficit in goods with the EU for many years. For the EU27, Brexit will create a particular problem due to the fact that 90% of the EU27’s wholesale banking market is located in the City of London. London’s financial district is strong in derivatives – designed as a hedging instrument against certain risks – as well as in foreign exchange trading of US dollar and euro contracts and the arrangement of big loans for EU27 multinational companies. After Brexit, the majority of the EU banking wholesale market, as well as many insurance contracts for EU27 countries, will be based outside of the Community. And this means that EU legislation will only apply (with certain exceptions) until the end of the transition period, 31 December 2020. While the Brexit-related analysis of many authors has focused on trade issues,2 the financial market perspective has been largely neglected despite possible financial instabilities in the medium term. The Annual Report of the Bank for International Settlements in 2017 has, however, pointed out that political instability could increasingly affect financial market dynamics.3

Even if Brexit is fully implemented, there is still hope that an EU-UK free trade agreement for goods could be achieved. Considerable volatility is anticipated in financial markets in the coming years given the fact that Brexit takes the UK and the EU into unchartered waters. Macroprudential supervision institutions in the EU28 and also relevant policy units at the International Monetary Fund (IMF) and the Bank for International Settlements (BIS) will carefully consider the potentially serious challenges ahead in financial markets. Macroprudential risk means a systemically relevant interplay of various potential risk elements that could affect the banking system, stock market dynamics or commodity pricing. Adequate policy responses should then reduce that risk in an appropriate way to control the underlying dynamics. Bank of England research has shown that foreign financial developments are often powerful predictors of domestic banking crises.4 From an EU perspective, global credit growth and certain banking and financial market indicators (from the US in particular) play a role with regard to the stability of banks in EU countries; and the international effect is larger for financially open economies. Clearly, most EU28 countries are financially open. American and other foreign banks in London actively offer financial services to EU28 countries in the current single market framework. (London banks in the EU single market benefit from “passporting” rules that allow banks from the UK to offer services to clients across the other 27 countries.)5 There are EU27-UK banking links that have two important post-Brexit perspectives:6

The risk of spillovers in terms of banking deregulation being transferred unintentionally from the UK to the EU27 should be more thoroughly analysed. There are certainly options for EU-UK regulatory cooperation. However, if Brexit brings a strong long-run output decline, thereby putting pressure on the British government to adopt reduced corporate tax rates and lighter financial regulation in the UK, the EU27 will not have much interest in regulatory cooperation. Research needs to be conducted to analyse how big the “forced” FDI relocation towards the EU27 in the banking and insurance sector will be and to assess the current account and nominal plus real exchange rate effects on the UK and the EU27, respectively.

The updated IMF FSAP reports for the UK and the eurozone in 2018 cannot replace the necessary cooperation with the European Systemic Risk Board. If macroprudential analysis in the ESRB in 2017-18 is restricted and does not deliver a comprehensive analysis for the EU28 countries, the cost of Brexit could be much higher than expected since the analytical gaps imply a lack of risk management from the policymakers’ side.

The EU28 countries should also take a critical look at financial markets and banking with regards to broader risk management perspectives. Is this happening as part of a rational international transition process in the Brexit dynamics in 2017/2018? No. The Bank of England apparently was partially blocking adequate analysis at the ESRB in which case Brexit could become a blind flight.

The type of supervision the ESRB is supposed to guarantee requires an understanding of the potential systemic risk that emerges from the interaction of individual banks in stress; shocks in foreign exchange markets, real estate markets or natural resources markets; shocks associated with fiscal or monetary policy; or political risks.17 In 2017, the Governor of the Bank of England – who is also First Vice-Chair of the ESRB – did not actively support the ESRB task to broadly analyse the relevant Brexit dynamics that could be highly relevant for systemic stability of the EU28 within a joint analytical effort. The ESRB’s risk dashboard results from March 2018 indicate some financial market links between EU27 countries and the UK. Regarding the strong UK financial market links to so many EU countries, the data for the UK is not available and, therefore, is not included on the risk map in Figure 2. 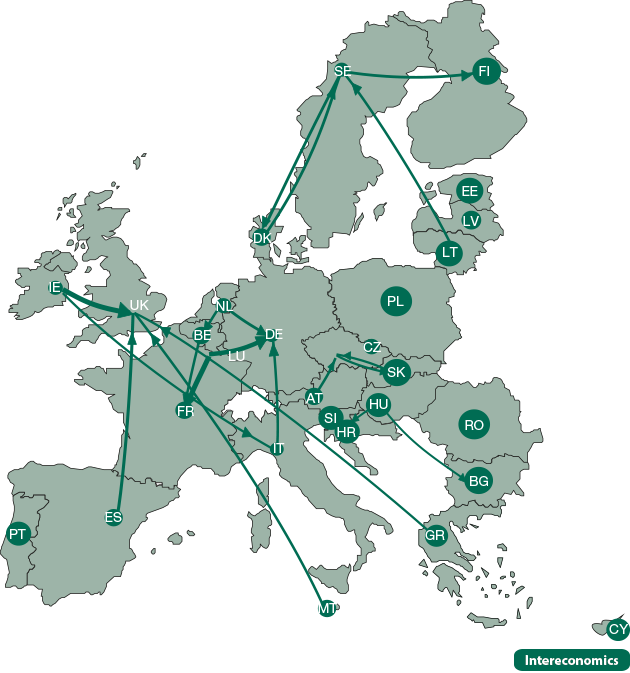 Notes: Based on consolidated banking data. The size of the bubbles corresponds to the ratio of domestic to total claims of a country’s consolidated banking sector. The thickness of the arrows depends on the share of bilateral foreign claims in the total claims of the banking sector extending the loans. Arrows are not displayed in cases where the corresponding ratio is below 5%. Due to the use of consolidated data, cross-border claims also include banks’ exposures to other countries in the EU through the presence of subsidiaries in those countries. Data for UK not available.

The Bank of England and other UK authorities have all the relevant data, and it seems obvious that the UK is being uncooperative in terms of risk analysis by the ESRB and thus is undermining the ability of the ESRB to fulfill its mandate. This already started happening two years before the UK departure date, at least according to the timeline of the May government. Will the European Parliament and the EU accept such non-cooperation from the UK in an EU28 institution? What are the conclusions about EU-UK cooperation to be included more or less strictly in the EU-UK treaties on Brexit? A free ride regulatory policy option for the UK would be quite inadequate both from an EU27 perspective and a global perspective.

In the context of Brexit, the ESRB will not look into the relevant macroprudential aspects of the EU28’s banking system and its interactions. The historic nature of Brexit reduces the EU’s economic weight by almost one-fifth.18 The departure of EU27’s wholesale banking market center – located in London – will likely temporarily strain the financial market. This clearly requires an integrated EU28 analysis rather than a separate picture of the UK and the eurozone as painted by the Bank of England and the ECB, respectively. In 2017, the ESRB apparently was either unwilling or unable to deliver this; and the role of the Bank of England is opaque.

As we have discussed previously, financial market risks in the Brexit transition process could be reduced if macroprudential analysis is adequate at the ESRB and if all policy actors in the EU28 assume their respective responsibilities. The challenges could, however, be considerable if rising US interest rates plus political instability and policy inconsistencies overlap in Brexit. Post-Brexit, the UK may only be an observer at the ESRB if an eventual EU-UK treaty makes arrangements which allow for such a status.

Leaving the EU puts a broader responsibility on the UK than simply considering narrowly defined national interests. It should be clear that before any EU-UK Free Trade Agreement can be negotiated, the EU27 must make sure that there is an agreement in the field of joint prudential supervision and cooperation for the years 2018-2020. It can be shown that there is a trilemma in the case of flexible exchange rates, namely that it is impossible to have both flexible exchange rates, free capital flows and adequate banking regulation.19 Considerable financial market volatility in Europe and in the US – due to EU28 spillover effects and Trump’s trade war policy effects – should be expected in 2018-2020 and high volatility could undermine prospects for stable economic growth in OECD countries.

The May government will face the option of pursuing a hard Brexit – which could result in a very serious Northern Ireland border regime problem or possibly even a new Scottish referendum – or accept a customs union solution, the latter seeming most likely. There is no doubt that political stability will be at a premium in the UK.

* I gratefully acknowledge the analytical and editorial support of David Hanrahan (EIIW). Research support from Tian Xiong, Vladimir Udalov and Christian Debes (EIIW) is also acknowledged. Discussions with colleagues at the IMF have also been useful. The usual caveat applies.