The emergence of a new technological paradigm based on information and communication technologies (ICTs) involves innovative mechanisms of knowledge creation and diffusion, changes in firms’ organisation within and across countries, and the development of new skills. In this framework, the relative importance of different factors of international competitiveness is also changing. Consequently, the shift to a knowledge-based economy requires a deeper understanding of the role of intangible investments, not only for economic growth but also for international competitiveness.

The relevance of intangible assets as drivers of growth was shown in Corrado et al., who built a simple three-sector model where production functions are specified for consumer goods and both conventional and intangible investments.1 The model was then used to show the impact of the capitalisation of business investments in intangibles on the economy’s input and output growth. The empirical results revealed that intangible capital has been the largest systematic driver of US business sector growth over the last 50 years,2 and that US businesses currently invest more in intangibles than they do in traditional fixed assets.3

At the same time, the digitalisation process and the drop in transmission costs favoured the globalisation of value chains. Baldwin has defined this as a “second unbundling” of globalisation, which means that not only goods but also tasks are traded, and consequently the final product sold in international markets is the result of production stages located in different countries which specialise in different tasks.4 While the international fragmentation of production has allowed more countries to be involved in the production of a final good, not all countries have retained the same benefits from this process. Overall, there is evidence that a great part of the value added of a final product is created in the first and last stages of the production process (R&D, design, marketing and sales), while firms involved in intermediate stages (such as the production of components and assembly) reap only a small part of the final value of the good or service produced.5

The literature on intangible capital and productivity growth (mostly at the macro and sectoral level) and on the organisation of global value chains (mostly at the micro level) have remained two separate fields of investigation. In this paper, after briefly reviewing these two fields of analysis, we suggest some lines along which they can be fruitfully linked in order to establish the basic framework with which to investigate the synergies between intangible capital and participation in global value chains (GVCs) as drivers of productivity growth in modern economies.

What are intangibles and why are they relevant for productivity growth?

Investments in intangible assets are widely recognised as major determinants of innovation, growth and employment in the “knowledge economy”.6 The literature on the sources of economic growth looks at the accumulation of intangible capital, expanding the core concept of business investment in national accounts by treating much business spending on “intangibles” – computerised databases, R&D, design, brand equity, firm-specific training and organisational efficiency – as investment.7 When this view is adopted, empirical evidence shows that business investments in intangible assets are fundamental drivers of growth and productivity. Corrado et al. found that once intangible capital is included in a sources-of-growth analysis, it accounts for 20-33% of labour productivity growth in the market sectors of the US and EU economies.8 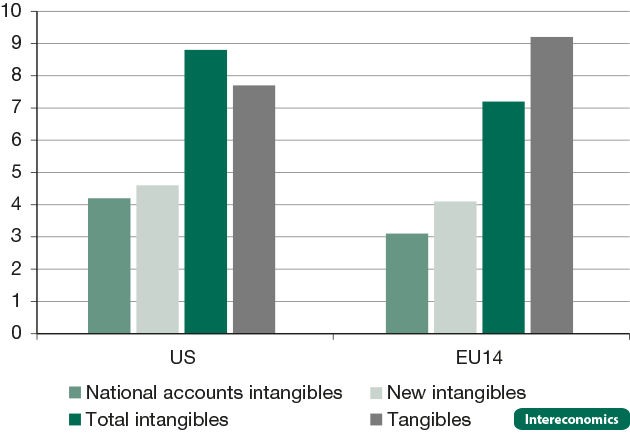 Source: C. Corrado J. Haskel, C. Jona-Lasinio, M. Iommi: Intangible investment in the EU and US before and since the Great Recession and its contribution to productivity growth, in: Journal of Infrastructure, Policy and Development, forthcoming.

The work by Corrado et al. is the first study showing that intangible capital is an essential ingredient for economic growth.11 Their three-sector model was used to show how the value of an economy’s input and output growth changed when business investment in intangibles was capitalised. They found that intangible capital accounted for two-thirds of US productivity growth in the business sector between the mid-1990s and the early 2000s. The same methodology has been applied in a number of other country studies, always revealing the relevance of the growth contribution of unmeasured intangible capital. The contribution to total factor productivity growth ranges from 14% in the United Kingdom to three per cent in Finland over a similar period.12 Other country studies estimated only the contribution of all intangibles to total factor productivity growth – 19% in Japan, 19% in France, 18% in Germany, nine per cent in Spain and zero per cent in Italy.13 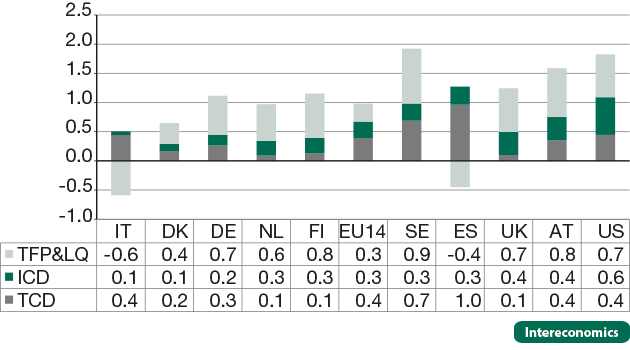 Figure 2 shows a subset of results of the growth accounting analysis developed in a recent paper by Corrado et al. using the newly constructed INTAN-Invest cross-country, cross-industry dataset for 18 European countries and the US, which is used to analyse the impact of tangible and intangible capital before and after the Great Recession in 2008-2009.14 They found that tangible investment fell dramatically during the Great Recession and has barely recovered, whereas intangible investment has been comparatively resilient; it recovered quite quickly in the US, though it lagged behind in the EU. As a consequence, the contribution of tangible investment was relatively small in some of the sample economies in comparison to the impact of intangible capital, which provided a larger contribution to productivity growth over the period (especially in the United Kingdom, Finland and the Netherlands). Overall, their findings support the evidence that the slowdown in labour productivity growth since the Great Recession has been driven by a decline in total factor productivity growth, with relatively minor roles for tangible and intangible capital.

Existing empirical evidence confirms the close linkages between innovation, value creation and economic growth, showing that intangible investments are important drivers of upgrading in GVCs.15 A key element which is necessary for countries to compete in high value added activities is the capability to produce sophisticated products, which is closely linked to the endowment of intangible capital.

There is a general consensus that integration into GVCs brings benefits beyond those traditionally associated with international trade in final goods, allowing countries to specialise in single tasks and benefit from economies of scale and scope. Indeed, empirical evidence shows that joining GVCs brings positive and significant gains in productivity.16

But what factors facilitate countries’ participation in GVCs? To the best of our knowledge, there are few empirical analyses which aim at disentangling the underlying determinants. These studies find that higher levels of development, infrastructure and human capital lead to increased participation in GVCs, while strict regulations, tariffs and other trade impediments are detrimental.17 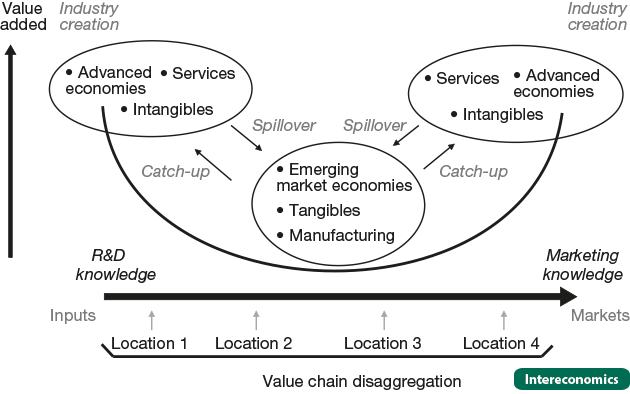 While the literature mainly agrees that participating in GVCs is largely beneficial, it has also been stressed that advantages are not equally divided among GVC participants. The classic example of the iPod supply chain discussed by Dedrick et al. shows that Apple captures between one-third and one-half of an iPod’s retail value; Japanese firms such as Toshiba and Korean firms such as Samsung capture another significant portion of the profits, while firms and workers in China capture no more than two per cent from assembling the product.18 The pattern of value added along the value chain may, therefore, be represented by what has been referred to as the “smiling curve”19 or the “smile of value creation”20: ranking activities on the x-axis along the value chain (where activities at the left or “input” end are supported by R&D knowledge, while activities at the right or “output” end are supported by marketing knowledge), value added will be higher in the first and last stages of the value chain. This is shown in Figure 3, which reports the smiling curve and the location of intangible assets along the curve. As the figure clearly indicates, intangibles are essential to creating value added in upstream (R&D, design) and downstream activities (marketing, advertising). These are the stages in which more value added is created and where advanced countries tend to specialise. Mudambi observes that competition by emerging economies threatens the position of advanced countries along the value chain, prompting them to create new activities; additionally, emerging countries also have an incentive to invest in intangible assets:

Firms controlling activities in the middle of the value chain have strong incentives to acquire the resources and competencies that will enable them to control higher value added activities. China, India, Brazil and Mexico are moving to develop their own brands and marketing expertise in advanced economies to increase their control over the downstream end of the value chain.21 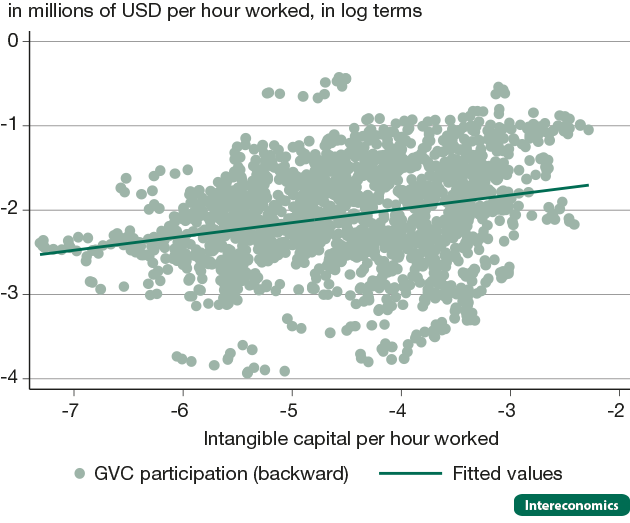 Figure 4 shows data on total intangible capital against participation in GVCs in the whole economy, all expressed in per hour worked across the sample countries.24 Correlation is significantly positive, suggesting a deeper analysis is warranted. We can also expect a positive relationship between GVC participation and productivity. There are several channels through which participation in GVCs and productivity can be linked. First, there can be advantages from specialising in the most productive activities and offshoring the least productive ones. Second, the (direct and indirect) import of higher quality and/or higher technology inputs may enhance productivity. Third, international supply chains facilitate interaction with frontier foreign (multinational) firms, potentially leading to knowledge spillovers. Fourth, competition leads to the growth of productive firms through the leveraging of economies of scale, while at the same time inducing the exit of the least productive firms.25 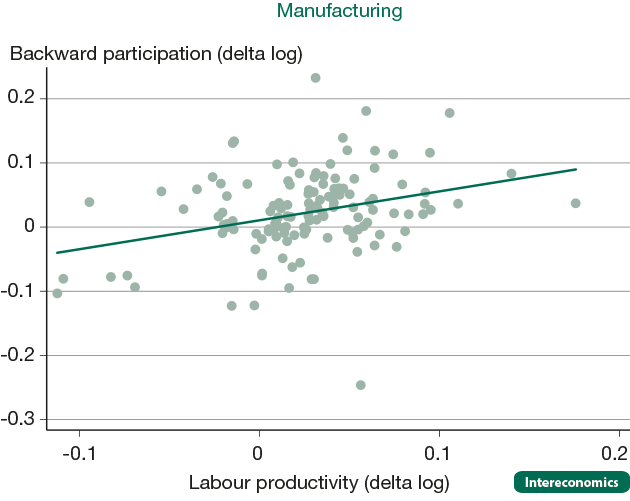 The heterogeneous behaviour of US and European countries in terms of intangible capital accumulation (with Europe and in particular some Mediterranean countries still lagging behind) suggests that greater efforts are required at the European level to encourage public and private investment in intangibles in order to foster economic growth and international competitiveness. This will also allow countries to benefit from the ongoing process of globalisation and participation in international value chains.