Intereconomics / Volumes / 2018 / Number 2 / Is Europe’s Productivity Glass Half Full or Half Empty?

Is Europe’s Productivity Glass Half Full or Half Empty?

The global economic and financial crisis left the European economy in dire straits for almost a decade between 2008 and 2016. Despite the recent growth strengthening, which has brought average GDP growth rates for the euro area and the EU as a whole about back to their pre-crisis levels, it is too early to speak of a structural growth resurgence. Unemployment is still relatively high, and there are still sizeable output gaps as well as labour slack in several European economies. Moreover, one of the most important structural performance indicators, productivity, is barely on the path of recovery. At the macroeconomic level, labour productivity growth in the euro area was just one per cent in 2017 and a touch higher for the EU28 (1.2%), thanks to the better performing Central and Eastern European economies. Today’s growth rates are still only about half of the labour productivity growth rates in the two decades before the financial crisis, and only a third of the growth rates in the 1970s and 1980s (see Figure 1). What is more, growth rates of total factor productivity (TFP) – a more refined productivity measure which measures output growth over combined labour and capital inputs – are still in the low tenths of a percentage point, and they show no decisive signs of recovery yet.

Nonetheless, while the recovery could indeed turn out to be short-lived, it would be unwise to ignore the recent uptick in productivity growth and simply treat it as a statistical glitch. Productivity typically strengthens in an expansionary phase of the business cycle, because employers wait to hire more workers until they are certain about the economic recovery taking hold. With no recession in sight in the short term, greater investment in machinery and equipment, as well as other business spending on innovation and automation, may raise productivity further and help pay for higher wages, as labour markets are beginning to tighten. 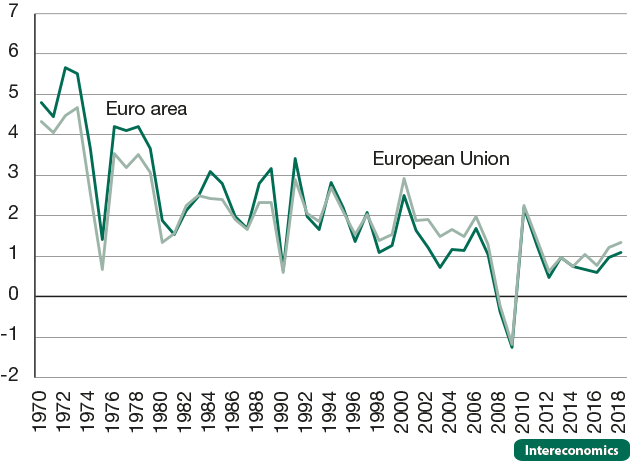 In this paper, we take a careful look at what is driving the productivity recovery and in which parts of the economy it is occurring. We analyse the productivity trend and annual performance since the financial crisis from multiple perspectives and using different datasets:

We find that the declining rate of labour productivity growth in most European countries has bottomed out in recent years. However, labour productivity growth rates have not fully recovered to pre-crisis levels. While TFP growth rates are obviously lower, as they adjust for capital deepening effects, the recovery in TFP growth relative to pre-crisis levels looks somewhat stronger, especially in the market services sector of the economy. Looking forward, TFP growth is projected to continue or even slightly improve from its current growth momentum in the coming decade, due to increases in human capital, digitisation and the realisation of further catch-up potential, especially in Central and Eastern Europe.

Labour productivity growth, measured as GDP per hour worked, increased by 0.4 percentage points to one per cent in the euro area in 2017 and is projected to marginally improve to 1.1% in 2018 (Table 1). The figures for the European Union are slightly higher, at 1.2% for 2017 and 1.3% for 2018. While these productivity growth rates are not spectacular increases in themselves, they do present a clear break with previous years, when the growth rates were more in the range of 0.6-0.7%. However, labour productivity growth has not yet returned to the average annual rate of 2000-2007, i.e. the period between the adoption of the single currency and the global financial crisis. Labour productivity growth then averaged 1.4% for the euro area and 1.8% for the EU as a whole; thus, only about half of the shortfall has now been made up for.

Notes: Growth rates are based on the annual percentage of difference of each variable and are aggregated using shares in nominal PPP converted GDP. Growth rates for 2000-2007 and 2008-2015 are the averages of yearly growth rates.

A notable exception to the picture sketched above is the United Kingdom, which has delivered weak productivity performance for most of the post-recession period. In recent years, growth in GDP per hour worked has not managed to break out of the 0.5-1.0% band, well below its performance during the decade leading up to the global financial crisis. There is also no real productivity improvement in the UK foreseen for 2018. The timing of the business cycle in the UK is different from that on the European continent, which started its current expansionary phase in earnest in the second half of 2013, whereas the UK economy seems to have peaked around 2015. Much of Britain’s post-recession recovery has been due to the strong performance of the labour market, but there are many indications that low-productivity firms, especially in the services sector of the economy, have been responsible for the employment-driven post-recession recovery.4

Total factor productivity is a more accurate measure of productivity, as it teases out the effects of increased use of machines and other capital and workforce skills from labour productivity. As such, TFP growth refers to the spillovers from technology and innovation which raise the efficiency with which the factor inputs labour and capital are utilised in the production process. At a micro level, TFP is also an important measure of business dynamism, as it determines whether individual companies will survive in the long run.5

TFP growth has been the Achilles’ heel of Europe’s productivity problem since the 1990s.6 With the onset of the global financial crisis, TFP dropped drastically, with overall losses in the range of five to ten per cent, depending on the country. Germany, France and the Netherlands were especially hard hit, while the decline in TFP had already set in around the mid-1990s in Spain and Italy. During the post-recession period, euro area TFP growth has stagnated, but it recently saw some modest signs of recovery in the range of 0.2-0.3% per year. 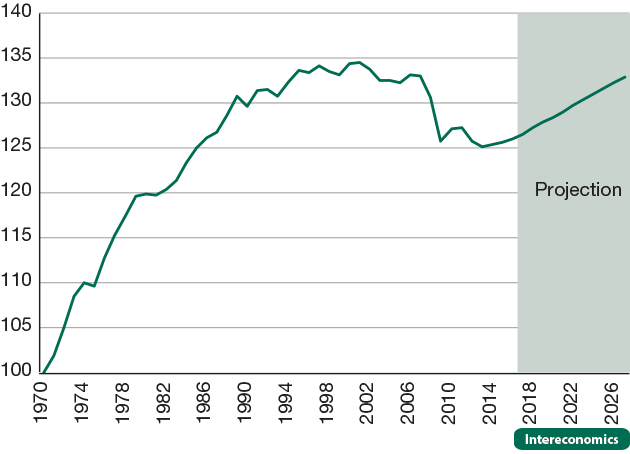 Somewhat surprisingly though, TFP projections from The Conference Board Global Economic Outlook model suggest that the recent modest positive trajectory of TFP growth in the euro area will extend into the next decade, eventually reaching a more healthy annual average growth rate of about 0.5% in 2018-2027 (see Figure 2). However, there are differences between countries, ranging from 0.2% in Italy to 0.6% in Germany. What underlying factors explain the improvement relative to the recent decades of TFP slowdown? Total factor productivity projections are especially sensitive based on their specifications, but the analysis tells a clear story:

In addition, slowing labour supply growth over the next decade due to ageing of the workforce could also raise the capital intensity of the production process through automation and thus raise labour productivity. Some argue that the effects of the current wave of digital transformation will become apparent in an uptick in the productivity statistics in the coming years.7 Sceptics, on the other hand, can point to the sluggish performance of the past 20 years or so, or the slow-moving agenda on the European single market for services.

Detailed analysis of productivity performance at the industry level shows that different sectors across the euro area have responded differently to the global financial crisis and the recent European recession. In particular, the latest update of EU KLEMS industry-level growth accounts for 12 EU economies through 2015 shows a different pace of recovery in the manufacturing sector vis-à-vis the market services sector (which excludes health care, education and government services).8

Table 2
Labour productivity and TFP in Europe in manufacturing and market services, 2002-2015

Average annual rate of change, in %

Is the productivity glass half full or half empty?

This paper shows that on the basis of the most recent estimates, it is clearly too early to call victory over the slow productivity trend in Europe of the past decade. Many recent studies have explored why productivity in advanced economies has slowed so much and so persistently.11 The risks of secular stagnation are still looming, driven by weak population growth and an ageing workforce in mature economies – and further exacerbated by a backlash against immigration. Combined with continued weak inflation, these developments will not be positive for innovation and productivity growth.

While we should avoid overhyping the productivity recovery, another risk is that the headline numbers may underwhelm us and we might consequently miss what is happening under the hood. Technology and especially digitisation have led to inflated early expectations of faster productivity growth. While new digital technologies have rapidly diffused across the economy, their absorption and translation into better business performance has been quite slow and uneven. This is not an unusual phenomenon. Harberger speaks of two types of growth.12 One is characterised as “mushroom” growth, in which a limited number of sectors, industries or firms deliver much better productivity performance than others. During this phase, exciting prospects about the productivity effects of driverless cars, robotics and artificial intelligence easily cause us to exaggerate the macro productivity impact of mushroom growth. The second type of growth is what Harberger calls “yeasty” growth, when the productivity improvements spread more widely across the economy. Even though we may not yet be fully harvesting the yeast effects, accelerated investment and business spending on cloud and digital services across many industries, rising wage premiums on skilled labour and stronger demand bode well for the broader emergence of automation and digitisation.

What do the improved productivity growth estimates for 2017 and 2018 in the euro area mean for its long-term trend? The productivity slowdown has garnered much attention in recent years, not least in European policy circles.13 The time factor does play an important role. Perez speaks of an “installation phase” versus a “deployment phase” of a new technological paradigm.14 During the installation phase, new business spending on machinery, innovation, and organisational and management changes exceeds the overall output recovery. During this phase, the famous Schumpeter credo of “creative destruction” may put more emphasis on creation than on destruction, and hence low-productivity firms can survive – especially in the past decade’s environment of low interest rates, credit growth and weak wage growth, in which cheap workers could still be relied upon.15 During the transition to the deployment phase, in which new technology spreads more widely and generates more productivity across the economy, the “destruction” of low-productivity activities could become quite disruptive, for example through a recession, which could trigger such an adjustment.

Whether the productivity glass is half full or half empty depends on what it is filled with. As rising labour and talent shortages become increasingly pressing, productivity growth will become the only way to raise potential growth back up to higher levels. Companies are likely to accelerate digitisation while transforming the higher skill premiums for talented workers into a return through higher productivity.

© The Author(s) 2018. Open Access: This article is distributed under the terms of the Creative Commons Attribution 4.0 International License (http://creativecommons.org/licenses/by/4.0/), which permits unrestricted use, distribution, and reproduction in any medium, provided you give appropriate credit to the original author(s) and the source, provide a link to the Creative Commons license, and indicate if changes were made.