Structural Reforms as a Panacea? The European Productivity and Growth Puzzle

This article is part of New Growth for Europe – On Investment, Crisis Management and Growth Potential

The European economy is not doing well. Or rather most economies in Europe are not doing well. Most of Northern Europe is in relatively better shape, with close to full employment. But even Germany is growing at less than the two per cent growth which many regard as necessary for the survival of the European welfare state. Most of Southern Europe is only gradually emerging from the devastating effects of the eurozone crisis, with unemployment receding only gradually and a country as big as Italy seemingly stuck in a growth rate below one per cent even as risk premia have fallen dramatically. But Europe is more than a collection of special cases. There is a broader trend, which affects all countries: growth is falling and certainly falling far short of expectations. The recipe almost universally recommended is “structural reforms”. But this is a recipe that has been tried intensively in recent decades, and it has failed.

Moreover, it seems that the low growth problem is particularly acute in Europe. Gordon argues that the sources which powered growth in advanced countries might no longer be operative today.1 But even if a global trend towards slower growth exists, it remains difficult to explain why, over the last ten years, GDP per capita has been almost stagnant in Europe and why the EU has stopped catching up to the US and now risks falling back badly.

One explanation that seems attractive at first sight is that Europe needs to invest more. In a comparative perspective, however, this is not convincing: Europe has underperformed now for a long time, even though its investment has been, until rather recently, higher than that of the US. Moreover, relative to its stagnant population Europe has put more people to work over the last decade. Given the amount of people and capital available, Europe should thus be growing strongly. Normally, one expects output growth to exceed the measured growth in capital and labour because the efficiency with which these factors are being used increases as technology improves. The technical term is total factor productivity (TFP). However, in Europe output growth has been below the level one would expect given the inputs of capital and labour. TFP “growth” has thus been negative for some years now. This is unprecedented for any major economy. Japan, for example, which is often held up as the example of a stagnating economy, never recorded negative TFP growth for any extended period. In terms of output per employed person, the EU recorded at least some growth until the crisis hit, but it was already much lower than the US (at least from the 1990s onwards). Since 2007 the EU has not made any progress in terms of output per person employed, whereas growth has continued in the US (Figure 1).

Figure 1
Growth rate in cumulative output per person employed, in constant prices, relative to base year (1990) 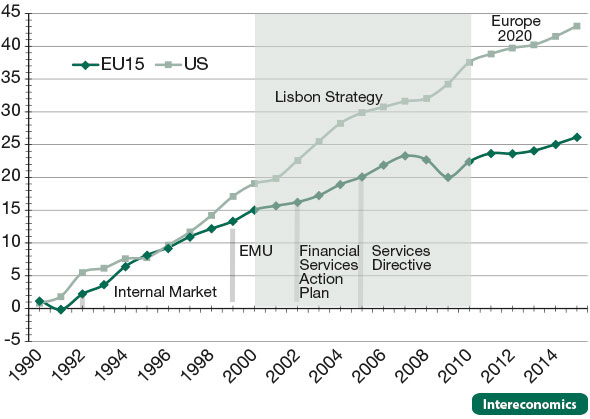 Source: Own calculations based on AMECO data.

The recent abysmal productivity and growth figures are not just a freak result of the financial and eurozone crisis. They should be seen only as the culmination of a trend which started in the mid-1990s. Before then, Europe was catching up to the US. Since then the catch-up process has stalled, and most recently it has even reversed. Table 1 shows that the growth performance of the EU15 deteriorated relative to that of the US after 1995 according to any parameter one wants to choose: GDP per capita, GDP per employed person, GDP per hours worked or TFP.

Source: Own calculations based on AMECO data.

For example, in terms of GDP per employed person, the EU was growing slightly faster than the US between 1980 and 1995. By contrast, during the following 15 years (1995-2010), the US grew faster than the EU by a cumulative 20 percentage points. In terms of GDP per hour worked, the change in relative performance is even more striking: for the 15-year period before 1995, the EU recorded a growth rate 20 percentage points higher than that of the US. Over the following 15 years, the difference changed sign and the US grew at a rate 15 percentage points faster. Moreover, it is not only the EU performance relative to the US which has deteriorated, but since 1995 there has been an absolute deterioration of all productivity measures in the EU15 – but not in the US.

The timing of this deterioration is a puzzle, given that it came after Europe undertook a number of major “growth initiatives” (see Table 2 for a selective list).

The first big European growth project was the so-called internal market programme, which consisted of a package of hundreds of laws at the EU level explicitly designed to make cross-border trade in Europe easier. Authoritative studies of the time suggested that the creation of the internal market should lead to a boost to GDP growth of 4.5 to 6.5 per cent, which, even if distributed over several years, should have increased the measured growth rate (of productivity) by about one half of a percentage point.2 However, nothing of that sort followed 1992. At the time, it could be argued that the major recession which had started around 1991 – and which was accompanied until 1995 by a major financial market crisis, mostly in the countries which are again today experiencing difficulties – made it difficult to detect the beneficial effects of the internal market. However, the productivity numbers continued to worsen even after the financial crisis of the 1990s had been overcome.

Next came the Economic and Monetary Union in 1999, which was also expected to increase growth prospects, at least temporarily. A major study by the Commission in 1992 entitled “One Market, One Money” argued that the benefit from eliminating currency exchange costs and lower interest rates in some countries should constitute a significant boost to growth and productivity.3

Other EU structural reform efforts since then include the liberalisation of the markets for financial services and the so-called services directive, which was approved by the EU with considerable controversy in 2005, with the aim of facilitating the cross-border provision of services. In both cases, the liberalisation was sold with the argument that this would result in significant welfare gains.4 Moreover, during the early 2000s, a number of EU countries liberalised their economies in major ways. According to the OECD’s product market regulation (PMR) indicators, every EU country removed restrictions (Figure 2). 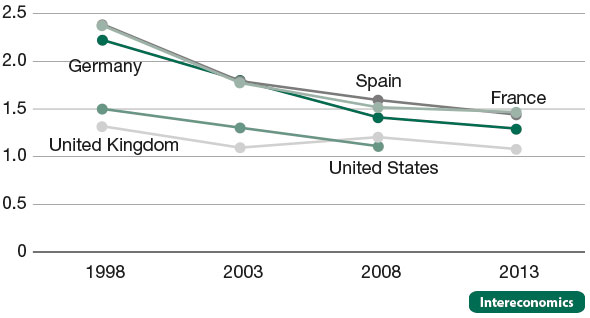 As a result, the distance between the EU average and the US (generally considered the most liberal among the major OECD economies) shrunk by half. Influential research by OECD economists purported to show that full liberalisation, as measured by these indices, should potentially lead to double-digit gains in output.5 Given that many EU countries have undertaken reforms (as measured by the OECD PMR indicators) which have halved the distance between them and the US, it is difficult to explain why growth has not picked up.

After an EU summit in Portugal in 2000, the EU even had the implicit growth target of three per cent, under the headline banner of the Lisbon Strategy, which aimed to make the EU the “most competitive” economy in the world. Studies by the Commission argued that the full implementation of the Lisbon Strategy should lead to an increase in GDP of 12-20%.6

The mantra that structural reforms will deliver vigorous growth cannot be verified based on the EU’s own growth record. However, recent publications by the IMF and the OECD again promise output gains of between four and twelve per cent from a set of product and labour market reforms.7 This call for “more of the same” is difficult to sell to a public which sees its living standards stagnating despite all the integration and reform activity at the EU and the national level.

So, should one stop talking about structural reforms? Not necessarily. The countries which did not undertake reforms were hit the hardest by the crisis, and those with the most flexible economies (e.g. Ireland) were the quickest to recover. Thus, it appears that countries which implement structural reforms are doing just okay, while countries that do not undertake reform efforts do not merely stagnate but risk falling behind. European policy makers seem to be condemned to continuously row against a current. Those rowing vigorously make little headway, but those who do not undertake this effort fall back.

What is the nature of this current pushing in a negative direction? It is unlikely to be due to globalisation and the rapid growth of the emerging economies, since other large mature economies are subject to a similar negative influence – and indeed, the EU has been better at exporting to the emerging economies than, for example, the US. Moreover, the US should be affected by globalisation in a similar way as the EU, but there has been no similar deterioration in the performance of the US since 1995. On the contrary, the US experienced a (temporary) increase of productivity after the mid-1990s.

Until they are able to diagnose with some precision the forces that push Europe backwards, European policy makers should be careful not to promise too much from structural reforms.