Intereconomics / Volumes / 2016 / Number 6 / EU Challenges, Investment in the EU and the Role of the European Investment Group

EU Challenges, Investment in the EU and the Role of the European Investment Group

This article is part of New Growth for Europe – On Investment, Crisis Management and Growth Potential

Since the financial crisis, Europe has made tremendous progress in restoring its economies onto a path to growth. Countries have adjusted their macroeconomic policies and implemented structural reforms, while economic policy coordination has been strengthened. A modest economic recovery is underway, but uncertainty is high and productivity growth and competitiveness are still weak, impacting on the medium-term growth outlook.

Following the recession triggered by the sovereign debt crisis in Europe, the recovery began in most EU Member States in early 2013. It started as an export-driven upswing but has been increasingly supported by domestic demand, particularly consumption. Growth of domestic demand has been sustained by falling oil prices and overall inflation, as well as by very accommodating monetary policy and the phasing out of fiscal retrenchment.

Against this backdrop, and when compared with other recoveries in the past, this recovery is disappointing. It also appears vulnerable, given downside risks and limited policy space. While monetary policy is close to the limits of what it can achieve, consensus on a more active fiscal policy is still lacking.

Indeed, on the political front, Europe stands at something of a political crossroads, facing growing social, economic and political challenges. Efforts are now focused on pragmatically advancing on key common priorities. The urgency and ambition with which this co-operation proceeds will be critical to success.

There are also large differences in regional and sectoral investment performance:

The gradual recovery of investment overall is good news, but there are downside risks. Falling productivity growth, comparatively low levels of investment in intangible capital and falling investment in infrastructure pose a threat to future growth. Financing conditions for firms have improved, but systemic market failures remain.

The introduction of the ESA 2010 national accounting categories has enabled a much more accurate estimation of infrastructure investment in Europe. While previously thought to have been quite resilient, we now see that infrastructure investment has fallen by about one quarter since 2009, from 2.3% to 1.7% of EU GDP. By 2015 it was well below 2005 levels, with no sign of a turnaround.

EIB estimations show that the average realised internal rate of return of firms has been in decline since the beginning of the financial crisis, across countries, sectors and firm sizes. Such a decline is to be expected after a crisis, but after eight years this explanation becomes less plausible, and it becomes increasingly likely that the decline is driven by falling rates of productivity growth. While easing monetary policy may have cushioned this trend, its continuation would obviously have serious implications for investment and potential growth.

In the EU, investment in intellectual property rights, a large part of which is accounted for by R&D expenditures, has fared better than investment in tangible capital (Greece, Latvia and Romania are notable exceptions). Yet global comparisons are not so flattering. The ratio of R&D expenditures to GDP in the EU remains nearly one percentage point below the US level and is falling behind relative to rapid growth in China, Japan and South Korea. EU investment in the broader category of intangible assets has proved resilient but is significantly lower than in the US, with growth too slow to close the gap. Investment in intangibles is positively correlated with greater labour market flexibility and government investment in R&D.

Financial conditions for firms have improved, but there remains room for further action

The ECB and other central banks in Europe have reacted to the crisis with an extraordinary package of monetary easing, including lowering interest rates to their effective lower bound and introducing unconventional measures such as the asset purchase programme. At the same time, the banking union aims to improve the resilience of the banking sector. These measures have gone a long way towards normalising financial conditions for investment by firms. Notably:

But many firms still face financing constraints, and given the possibility of a continued low interest rate environment with declining productivity growth and limited scope for further monetary easing, some areas of weakness are troubling:

Our analysis shows that the crisis has reduced the ability of the EU financial system to allocate resources efficiently to support the most productive firms, thereby contributing to slowing productivity growth overall. Firms in the EU have been particularly exposed to the effects of the crisis because of their heavy reliance on bank lending and lack of opportunities to turn to capital markets.

Investment in the EU has started to recover, but this recovery is weak by historical comparison and uneven. Declining investment in infrastructure is a major concern that has implications for Europe’s long-term competitiveness and potential growth. Likewise, the slowness of the recovery in investment by firms is disturbing, particularly given the extraordinary monetary stimulus. The continued decline in returns to firm investment suggests that action is needed to raise productivity growth, yet innovation-related investment in intangibles remains low by international standards, and binding financial constraints and other market failures have reduced the efficiency of resource allocation. Avoiding investment stagnation requires continued action on at least three fronts:

In the EU, years of underinvestment, exacerbated by the crisis, mean that many infrastructure assets are reaching the end of their economic life, creating an investment backlog. At the same time, infrastructure needs to be upgraded to meet the demands of the future, such as the need to ensure the security and sustainability of energy supply, to ensure efficient and sustainable mobility and logistics, to meet demand for digital services, and to remain resilient to the effects of climate change and resource scarcity.

The European Investment Bank (EIB) plays an important catalytic role in promoting sound investment projects in support of EU policy goals in Europe and beyond. Figure 1 provides an overview of these activities. As a bank, it raises money from international capital markets using its AAA credit rating. As a public institution owned by the 28 Member States of the EU, it lends these funds to finance investment projects that address systemic market failures or financial frictions, targeting four priority areas in support of growth and job creation: innovation and skills, SMEs, climate action, and strategic infrastructure.

Figure 1
The role of the EIB Group 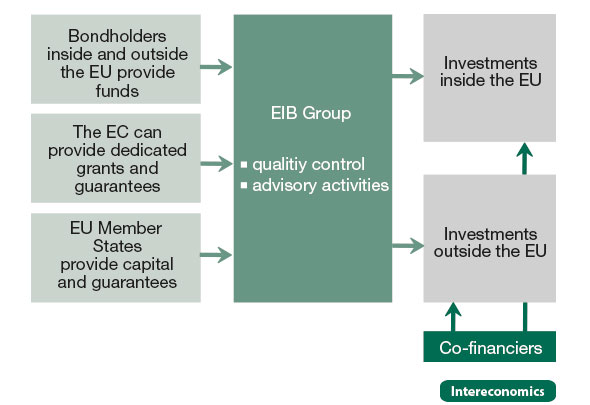 In 2015 the EIB provided €77.5bn in long-term finance to support private and public productive investment, with the European Investment Fund providing €7bn. At a first estimate, this helped realise investment projects worth roughly €230bn and €27bn, respectively. All the projects the EIB finances must not only be bankable, but also comply with strict economic, technical, environmental and social standards in order to yield tangible results in improving people’s lives. Alongside lending, the EIB’s blending activities can help leverage available funding by, for example, helping transform EU resources under the European Structural and Investment Funds (ESIF) into financial products such as loans, guarantees, equity and other risk-bearing mechanisms. Advisory activities and technical assistance can help projects to get off the ground and maximise the value-for-money of investments.

EIB lending has a big impact: During the last capital increase period (2013-2015), EIB total lending supported €372 billion of investment. Our preliminary estimates suggest that this may increase the EU’s GDP by around 1.1% by 2030, adding about 1.4 million jobs.

The Investment Plan for Europe undertaken by the European Commission and the EIB further enhances the EU policy response to relaunch investment and restore EU competitiveness. It consists of three main pillars: finance through the European Fund for Strategic Investments (EFSI) to enhance the EIB Group’s capacity to address market failures in risk-taking that hold back investment; the European Investment Advisory Hub, to provide comprehensive technical assistance in the sourcing, preparation, and development of investment projects; and support for regulatory and structural reform to remove bottlenecks and ensure an investment-friendly environment. As of mid-October 2016, 362 EFSI transactions had been approved, potentially leveraging 44% of the full €315bn envisaged.

Overall, with Europe in need of productive investment and a weak investment recovery, there is still scope for coordinated policy action to support investment. The EIB Group and EFSI are doing their part to enhance European productivity and growth potential.