No Risk, No Fun? Foreign Direct Investment in Central and Eastern Europe

In the course of transition from planned economies to market economies, foreign direct investment played an important role and contributed to international economic integration in Central and Eastern Europe. This paper investigates the determinants of FDI in Central and Eastern Europe, a region which in large part still lacks strong institutions. The empirical analysis presented in this article finds evidence that country default risk is not necessarily a hindrance to FDI. In contrast, factors like market size, labour cost and trade liberalisation do matter for FDI engagement in the region.

Foreign direct investment (FDI) has long been regarded as a catalyst for restructuring, modernisation and economic development in Central and East European countries (CEECs), so-called transition economies.1 From a macroeconomic perspective, it seems to be the case that FDI facilitated the transition from planned to market economies in CEECs and their integration into the world economy.2 After the breakdown of socialism, foreign investors, mainly from Western Europe and other high-income countries, found it attractive to establish subsidiaries or to acquire production plants in CEECs.3

As shown in Figure 1, the stock of FDI in CEECs4 from high-income economies5 has increased strongly since the early 1990s. Yearly FDI inflows to CEECs have increased almost constantly, only experiencing a heavy decline due to the global economic crisis in 2008-2009. Since then, the yearly FDI inflows have not reached their pre-crisis peak of 2007.

in billions of euros 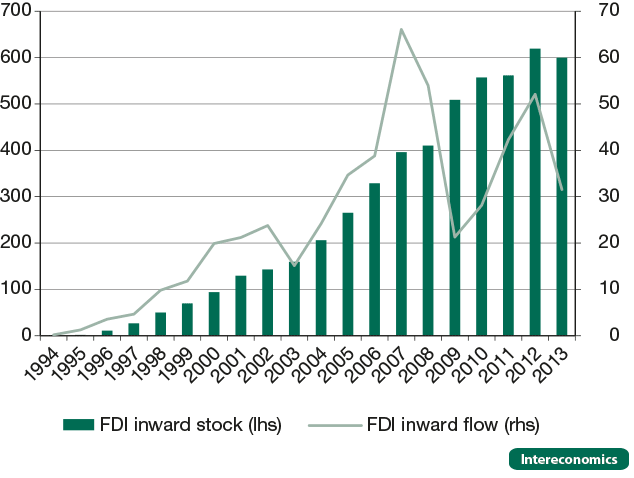 FDI in CEECs has been concentrated mostly in a few economies, namely Hungary, Poland and the Czech Republic, which together accounted for 48 per cent of total FDI stock in the region in 2013. Both, the geographical proximity to Western Europe and EU enlargement, with its institutional unification in many economic areas, are two major reasons for the concentration of FDI in these countries.6

Because of positive expectations about the developmental effects of FDI, many countries introduced policies to attract FDI, such as tax holidays, import duty exemptions, direct subsidies to foreign firms, infrastructure improvements and sometimes even monopoly rights.7 These policies contribute to an investor-friendly business environment, which is essential for sustainable and long-term oriented investment. Policy schemes are, however, only one attraction factor for FDI in CEECs. There are more traditional factors, such as market size, proximity and integration into the world economy.8 Last but not least, recent literature on institutional factors shows that stable and reliable institutions matter strongly for the attraction of FDI into CEECs.9 While every investment bears risk, foreign investment is even more vulnerable because of uncertainties related to distance, familiarity with the local environment and possible changes to formal and informal institutions. Recent economic developments in Eastern Europe related to the geopolitical tensions between Russia, Ukraine and the EU have renewed the importance of a stable business environment for trade and FDI.

In this paper, we pay attention to traditional explanatory factors of FDI in CEECs as well as risk (in terms of institutional factors) as a determinant of FDI from high-income countries to CEECs. A simple correlation analysis between creditworthiness (as an important component of risk) and FDI shows that the correlation coefficient is positive and significant. Beyond purely descriptive analyses, we also make use of a newly established panel database on bilateral FDI flows from 17 individual source countries to 14 CEECs between 1994 and 2013. We assume that gravity effects between the two groups of countries play a role. Furthermore, we expect that higher risk associated with weaker institutions also matters for the attraction of FDI.

In international business literature, one of the most important theoretical concepts to explain multinational companies’ activities is the ownership, location and internalisation (OLI) paradigm.10 The existing literature translates the theoretical considerations into a number of explanatory variables,11 and a new stream of literature on FDI seeks to incorporate OLI advantages into general equilibrium models12 and into a general gravity model.13

Further, we assume that there is a relationship between trade and FDI.17 Normally, we expect that trade openness has a positive impact on FDI because a liberal trade regime of the host economy facilitates import and export activity of investing firms. Accordingly, various analyses record a strongly positive effect of openness on FDI.18 Thus, we expect that a country’s degree of trade openness has a positive influence on FDI inflows.

Labour costs have been frequently discussed as a determinant of FDI.19 Some studies show that it is skills and not wages that have an impact on FDI location.20 At the same time, many investigations demonstrate that higher wages discourage FDI.21 In line with this latter literature, we assume that lower labour costs in CEECs attract FDI from developed economies.

In the international business literature, the concept of distance is associated not only with its geographical dimension but also with cultural and linguistic factors. Distance can be considered as a measure of the transaction costs of FDI activities.22 Prior research demonstrates a negative impact of distance on FDI.23 Thus, we assume that a growing distance between source and host country reduces FDI flows and stocks.

Finally, existing empirical evidence acknowledges the importance of legal transparency, institutional stability as reflected in policies towards FDI, tax incentives, the effectiveness of current regulations, the scope of corruption and the degree of political stability for attracting FDI.24 Loree and Guisinger25 and Henisz26 found a negative relationship between political risk and FDI. In our study, we assume that the better the institutional environment in terms of the creditworthiness of the host country, the more likely it is for this country to attract FDI from developed economies.

The empirical results are based on a sample of time-series cross-sectional data on 14 CEECs obtained from a database by the Vienna Institute for International Economic Studies. Panel data analysis is a popular tool for researching aggregate FDI flows. The first dependent variable (FDIINij) is inward FDI flows (in euros). The other dependent variable, FDIISij, represents FDI inward stock (in euros).

Our dataset covers the years 1994-2013. Each observation point represents either an FDI flow (in million euros) between one of the 17 developed source countries i and a recipient country j or an accumulated stock of previous FDI inflows in the host country in any given year.27 The source countries were selected in accordance with their contributions of FDI outflows to the world. Their FDI outflows in 2012 accounted for more than half of total world FDI outflows (53 per cent). The selected host countries received only a modest share of total world FDI inflows in 2012 (seven per cent), but this represents a strong increase over the early 1990s.

We use a general gravity model, denoting the year by t, source country by i and host country by j, and estimate the following specifications:

where GDPti(j) stands for the size of the source (host) country, ULCj are the unit labour costs in the host country, tradetij measures the openness of the host economy, distanceij represents the geographical distance, and risktj denotes the legal and institutional framework in the host country.28 Hence, this form of the gravity equation controls for factor cost, openness and institutional development. Since we cannot exclude that FDI reacts to these explanatory variables only with a lag, we estimate Equations (1) and (2) using both non-lagged and one-year lagged independent variables.

Considering our model specification, a relative unitless labour cost variable was used to ensure that a lower wage does not depend on labour productivity or currency valuation. The variable distanceij refers to the geographical distance between the capital cities of country i and country j in kilometres. Multinational firms engaged in export-oriented investments are likely to invest in an economy with established trade relations; hence, the trade variable is designed to capture the openness of the host economy.29 Given our interest in the bilateral FDI flows, the trade variable is also constructed bilaterally. It is calculated as the ratio of total imports by the host country from a certain source country to the host country’s GDP per capita.

As described by Jun and Singh, the riskiness of the economic environment in the host country may discourage investment in catching-up countries.30 Previous studies use different variables to capture this effect, for instance, fluctuations in inflation and economic growth, exchange rate stability,31 and EBRD transition indicators of institutional development.32 A high collinearity of these indicators is a great limitation to their simultaneous use. Therefore, just one particular variable is usually included in a model at a time. Some authors resolve this issue by constructing their own risk indicators using various methods, such as principal components analysis33 or a count method.34

Following Bevan and Estrin, we shall use an indicator of riskiness that can easily be accessed, not least by decision makers in multinational corporations.35 This risk rating is derived from an ex ante assessment of the government default risk rather than an ex post evaluation constructed by researchers. Credit ratings of country j originate from various issues of Institutional Investor,36 a biannually published journal. The Institutional Investor credit rating ranges from 0 (indicating countries with the lowest creditworthiness) to 100 (indicating the lowest likelihood of a country default risk).

Table 1 gives an overview of the variables used in the models, their explanations and the expected signs.

Table 1
Independent variables in the models

Overall, both regressions show highly significant results. We reject the null hypothesis of joint parameter insignificance at the one per cent level.

The positive relationship between trade openness and FDI is also supported by our results. FDI and trade are complementary because host countries that have higher trading volumes with source countries also draw significantly more FDI.38

Somewhat surprisingly, FDI inflows to CEECs are not always influenced significantly by institutional factors, measured in terms of creditworthiness. While the variable risk and FDI are positively correlated in a bivariate analysis, risk becomes insignificant when the other variables are included in the regression. The coefficient is positive and significant only for FDI inward stock in the estimation that uses lagged explanatory variables.

In general, the results show that countries that are more successful in attracting FDI have growing (market) economies and low labour costs, and they exhibit trade openness. This finding is in line with other studies.39

Our expectation that a high risk of country default is a deterrent to foreign investment has not been fully confirmed. As we have shown above, low risk is not sufficient, and high risk is not necessarily a hindrance for FDI. Transition countries seem to attract FDI regardless of their assessed level of sovereign default risk. This could be because single large investment projects may still be deemed very attractive and because market access, especially for consumer goods, is highly valued. This finding should, however, by no means imply that efforts to achieve stable and reliable institutions may be dispensed with.

Positive economic development effects through FDI require diversified inward FDI flows within a stable market-oriented environment. Attracting market- or resource-seeking FDI, in combination with the low (labour) cost argument, might be reasonable, especially in an early phase of catching-up, but it cannot be regarded as a lasting and long-term strategy. Policy makers should aim at technologically attractive FDI at an early stage that will help create adequate physical and educational infrastructure.