Jobs and Competitiveness in a Polarised Europe

In the aftermath of the crisis, Europe is becoming more polarised in terms of employment, competitiveness and industrial specialisation. A “German-centred core” – which maintained employment and production – has emerged, contrasted by a “Southern periphery”, where major economic losses have occurred. Such geographical divergence is associated with a further polarisation in terms of skills. A new European industrial policy is needed to reverse this polarisation process and its dangerous implications for trade balances and cohesion.

The model of growth and integration followed in Europe in recent decades was founded on a high degree of liberalisation of the capital and goods markets. The economic convergence of EU member states has been one of the fundamental objectives of this “supply side” policy approach. However, the expected convergence has been limited, and the impact of the current crisis has led to a growing divergence among European countries in terms of employment, competitiveness and industrial specialisation. A growing body of evidence, including Simonazzi et al., Stoellinger et al., and Landesmann,1 has identified the emergence of a “German-centred core” – which has maintained high levels of employment and production – while the “Southern periphery” has suffered major losses.2 Such a geographical dichotomy is also reflected in a divergence of jobs and skills.

Looking at the employment dimension, the 2008 crisis has deeply affected European jobs. In the first quarter of 2014, 16.3 million people had been out of work for 12 months or more, almost twice the number from 2007.3 However, such job losses have been highly uneven. 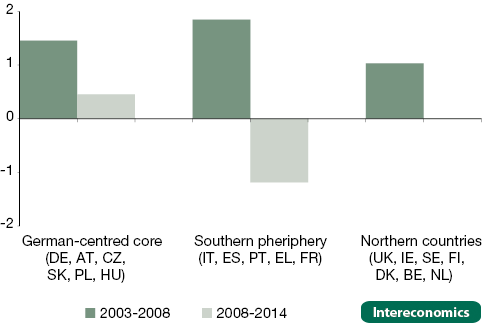 As shown in Figure 1, employment in the German-centred core has modestly expanded beyond its pre-crisis levels, with average annual employment growth of around 0.6 per cent. Conversely, the Southern periphery has experienced massive job losses, reversing the strong growth observed during the previous upswing (2003-2008). Dramatic reductions in employment occurred throughout the entire Southern periphery, but Greece and Portugal were hit the hardest, experiencing annual job losses of 4.6 per cent and 1.2 per cent respectively. Thanks to job growth in the Netherlands, Sweden and the United Kingdom, a third country grouping, consisting of northern European countries, has avoided job losses.

The division between the German-centred core and the Southern periphery is also remarkable in terms of youth unemployment figures, which reflect job opportunities for new entrants (15-29 years of age) in the labour market. While youth unemployment between 2008 and 2013 increased moderately in the core (with the positive exception of Germany, where a reduction of 2.3 percentage points was observed in this period), it dramatically increased by 14 to 32 percentage points in the periphery, with youth unemployment in Greece reaching 48.7 per cent in 2013 – seven times the value for Germany.4

The divergence between a German-centred core and a Southern periphery exists not only in terms of economic performance but also for skills.5 Using the International Standard Classification of Occupations (ISCO), we investigated the evolution of four professional groups that account for a wide variety of skills: managers, clerks, craft workers and manual workers. ISCO classification synthetises the multidimensional aspects of jobs in terms of tasks, level of autonomy in the workplace, education and wages.6 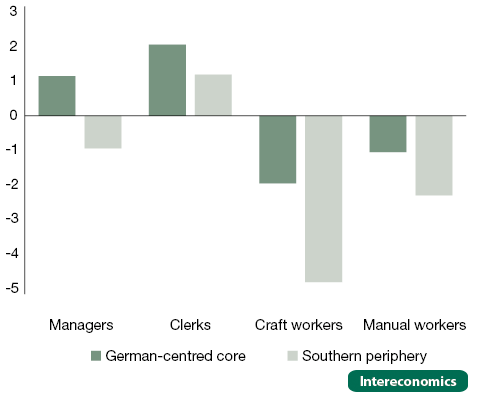 Figure 2 shows that the German-centred core and the Southern periphery have had dramatically different trajectories. The core has continued to create employment in higher-skilled positions – managers and clerks – with modest losses in lower-skilled jobs. The periphery has suffered job losses at both the top (managers) and bottom (craft and manual workers) of the jobs distribution, suggesting a downgrading of the whole occupational structure, which has led to the emergence of a hierarchical divide between the two areas.

In Europe the overall evolution of the skill structure has led to a polarisation of skill sets instead of the upskilling suggested by the skill-biased technical change view. Employment polarisation occurred more quickly during the previous upswing (2003-2008), while the crisis has led to major job losses among low-skilled workers in manufacturing and mid-skilled workers in services.7 Construction and manufacturing lost ten per cent of their pre-crisis employment levels. Conversely, the services sector employs over 70 per cent of the EU workforce, and its share continues to grow. Public services like health and education were more resilient in terms of post-crisis employment.

The divergence in sectoral performances contributes to a reshaping of Europe’s employment through a combined process of structural and technical change.8 In order to identify how employment has been transformed by these dynamics, we decomposed the total change in employment at the industry level during the period 2008-2014 into two main components. First, we accounted for the number of employees moving from manufacturing to services during this period (the between-industries component). Second, keeping the employment dimension of manufacturing and services constant over time, we accounted for changes in the skills structure within each sector (the within-industry component).9 As shown in Table 1, the growth in managers during the crisis has been driven by the expansion of services and by the upskilling within services; all of the other skill groups have experienced losses in manufacturing and modest rises in services, as well as reductions of their share within each industry.

Table 1
Decomposition of employment change by skill and macro sector, 2008-14

A pattern of job destruction in a context of increasing geographical polarisation is affecting the European Union. Low-skilled workers have sufffered the most since the onset of the crisis, above all in the manufacturing sector and in the Southern periphery, where a downgrading of the occupational structure has emerged. As the ranking of professional groups is associated with the hierarchy of wages, such patterns are fuelling the growing income inequality within Europe.

The evolution of the European industrial structure

The trends discussed above are strongly linked with change in the industrial structure.10 Figure 3 shows that the German-centred core has combined a larger increase in industrial production with the best performance in total employment; meanwhile, the Southern periphery has lost in terms of both production and jobs.

Figure 3
The relationship between employment and industrial production, 2008-14

Such changes have been affected by the long-term process of deindustrialisation and the rise of services that has characterised all advanced countries.11 Moreover, production systems have become more complex and internationalised, with the fragmentation and international integration of production leading to offshoring and outsourcing, particularly to emerging economies.12

These developments have been uneven across European economies, reflecting in terms of industrial production the same asymmetries between core and periphery that were described above for employment. Germany has managed to build and lead a strong production network in the countries of the German-centred manufacturing core. This heterogeneous evolution of industries, and the divergent specialisation dynamics among countries, have accelerated since the 1990s.

The countries belonging to the German-centred core have recovered from the crisis faster in terms of employment, GDP and export market share. Conversely, a substantial loss of production in the Southern periphery between 2008 and 2013 has accelerated the polarisation process.13 The contraction observed in the periphery represents an erosion of the European Union’s manufacturing base and has been identified as a threat to European industry’s growth and competitiveness in the medium to long run.14

Figure 4 highlights the dynamics of polarisation among member states in terms of manufacturing share over the period 2008-2013. A clear divergence in specialisation between the two country groups emerges. 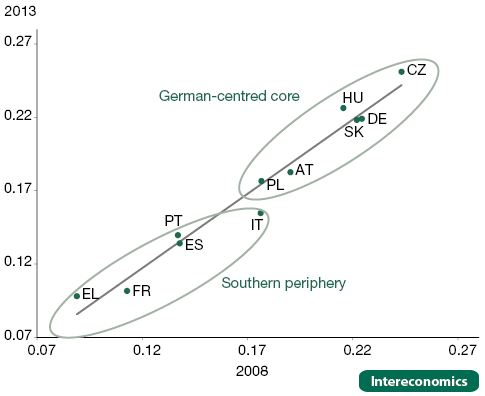 The positive relationship between the size of the manufacturing sector and innovation intensity characterises the German-centred core. Conversely, the Southern periphery is shrinking in terms of R&D efforts, innovation performance and manufacturing base. Such divergent trajectories are deepening the polarisation across the EU.17 Due to their proximity and alignment with the core, the Central and Eastern European countries have increased their innovation efforts, while the Southern periphery continues to decline.18

These divergent patterns are linked to a deeper process of structural change across European economies.19 As shown by Landesmann, the German-centred core has experienced a shift towards technologically advanced sectors, while the contraction of these sectors in the periphery has been remarkable.20 Conversely, the share of construction and market services – traditionally non-tradable sectors that play little role in the diffusion of innovation – increased significantly in the periphery. Thus, the rising polarisation across the EU27 has also emerged in terms of structural change.

The dynamics of structural change is closely connected with the competitiveness of industries. In particular, competitiveness strategies based on technological enhancements, innovation and product complexity could help to enable growth-enhancing structural change. The latter element is particularly relevant in terms of the acquisition and maintenance of high-value market shares in global competition. On the contrary, cost competitiveness strategies aiming to compete by reducing labour costs weaken the foundation for a technological upgrade of the economy.21

Considering the European Union as a whole, it is important to stress that the continent is still characterised by a relatively strong industrial structure and enjoys international comparative advantages in most manufacturing sectors – including pharmaceuticals, chemicals, vehicles, machinery and other transport equipment (which includes aerospace) – as well as in low- and medium-tech sectors such as food, beverages, tobacco, paper and plastic. The same picture appears when we look at the degree of complexity of products as an indicator of competitiveness.22 In most of the sectors where European industries have a comparative advantage, the products are characterised by a high degree of complexity.

The production of complex and technologically advanced products has allowed European industries to be well positioned in global competition, in particular vis-à-vis emerging economies. Between 1995 and 2009, as Chinese exports increased dramatically, EU value added in Chinese manufacturing exports increased more than that of industries from other parts of the world.23

This good position of the European Union as a whole in terms of industrial competitiveness is endangered by the polarisation dynamics described above. Such dynamics could be harmful for the competitiveness of European industries in the medium run. A decrease in importance of the high-tech sector and an overall contraction of the manufacturing base in Europe’s periphery would increase the EU’s vulnerability to Asian exports and reduce the potential for knowledge and innovation diffusion in Europe.

In recent years, the so-called core and periphery countries of the EU have undergone an economic divergence in terms of employment, industrial structure and competitiveness. In order to counterbalance such a polarisation and strengthen the competitiveness of European industries, a new industrial policy is needed.