The persistently low wage and price growth in the EMU after the Great Recession of 2009 led some economic observers to conclude that the Phillips Curve has broken down and that the ECB should therefore reconsider its inflation target. This study makes use of the considerable cross-country and cross-time heterogeneity in terms of inflation and capacity utilisation of EMU member states after the Great Recession to investigate whether these claims are corroborated by empirical evidence. The results point to the conclusion that the Phillips Curve is alive and well in the EMU and centred at or only slightly below the ECB’s inflation target. Therefore, a readjustment of the inflation target seems unjustified. Furthermore, as the ECB can expect inflation to return to its target, it possibly can accelerate tapering its unconventional monetary policy measures as the recovery continues.

The Great Recession of 2009, that followed the global financial crisis of 2007 and 2008, hit all member states of the European Monetary Union (EMU). However, the recovery from the crisis was very heterogeneous. While Germany in particular, the EMU’s largest economy, bounced back in a textbook V-shaped recovery, others suffered years of shrinking economic activity and have only recently returned to solid growth rates. Overall, the capacity utilisation of the EMU was well below its potential output and inflation was consistently below the ECB’s medium-run target rate of “below but close to two percent”. That prompted the ECB to adopt an unprecedented expansionary policy stance with very low and even negative policy rates and a whole set of unconventional monetary policy measures such as quantitative easing and forward guidance.

Beginning in 2016, the economic recovery engulfed the entire EMU including the so-called crisis countries. However, wage increases remain low in the EMU’s member states. This has led some observers, including Claudio Borio1 – chief economist at the Bank for International Settlements – and the German Central Bank to believe that the short-run relationship between the capacity utilisation and the wage and price growth, i.e. the Phillips Curve, has broken down in the post-crisis era2. Some pundits also call for a reconsideration of the ECB’s monetary policy strategy, particularly the inflation target. German economist Bert Rürup even suggested redefining the inflation target as a range between one and three percent in order to avoid the ECB’s loss of credibility due to the continuous failure to bring inflation back to its target.3

For the ECB, the Phillips Curve is of central interest. If the Bank’s inflation target is credible, the Phillips Curve should be centred at the ECB’s target rate, i.e. if the capacity utilisation is at its normal level, the inflation rate should equal the target rate. If capacity utilisation deviates from its normal level over the business cycle, i.e. unemployment is higher or lower than the natural rate of unemployment and the output gap is not zero, the Phillips curve describes how much the inflation deviates from the ECB’s target rate. In times of economic slumps and particularly in severe economic crises, below target inflation rates are to be expected and call for a loose monetary policy stance. The opposite is true in times of economic booms. 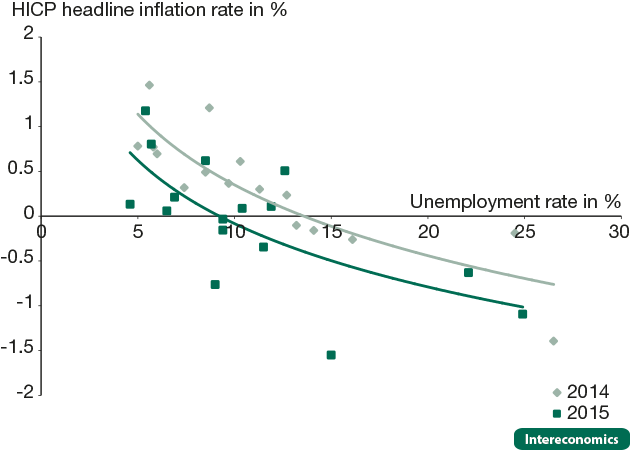 Note: Annual data for the EMU-16 countries. The Phillips Curves are shown as log-linear regression curves using cross-country data of the respective year.

Figure 1 shows two simple cross-country Phillips Curves for the years 2014 and 2015, which relate the HICP headline inflation to the unemployment rate. This cross-country comparison demonstrates that EMU member states with a higher unemployment rate tend to exhibit lower inflation rates and, thus, yield the result that one would expect when the Phillips Curve is valid. Moreover, comparing the 2014 and 2015 Phillips Curves shows that the stark decline in the world market price for crude oil in 2015 shifted the Phillips Curve downwards but the relationship remained stable.

Equation (1) describes the Phillips Curve in a linear form7, where π denotes the inflation rate in percent of country i in year t, c the constant term, y~ the output gap in percent of the production potential: β the slope parameter and u the error term. For inflation, the year-over-year change in the Eurostat headline Harmonised Index of Consumer Prices (HICP) is used; for the output gap, the estimate by the European Commission8 is used, obtained from their AMECO online database.9

Source: Own table and calculations.

The regression results are shown in Table 1. The Breusch-Pagan Test for heterogeneity rejects the null hypothesis of homogeneity and therefore rejects the pooled-OLS model 1. Hence, unobserved heterogeneity needs to be taken into account which is done in model 2 and includes country-specific random effects. Adding time-specific random effects (model 3) as well increases the quality of the model further as evident from the lower Schwarz Bayesian Information Criterion (SIC). Hence, model 3 is the superior model and is used in the following interpretations. Moreover, the Hausman Test does not reject the random effects modelling in favour of a fixed effects modelling of the unobserved heterogeneity.

The regression results indicate that there is a statistically significant relationship between the inflation rate and the capacity utilisation of the real economy. With a one percentage point increase in the output gap, the inflation rate rises by 0.1 percentage points which is, admittedly, economically not very strong. Moreover, the average inflation rate of an EMU member state over the business cycle is 1.5% to 1.6%, which is in line with or maybe just slightly below the ECB’s inflation target, depending on the interpretation of “below but close”.10 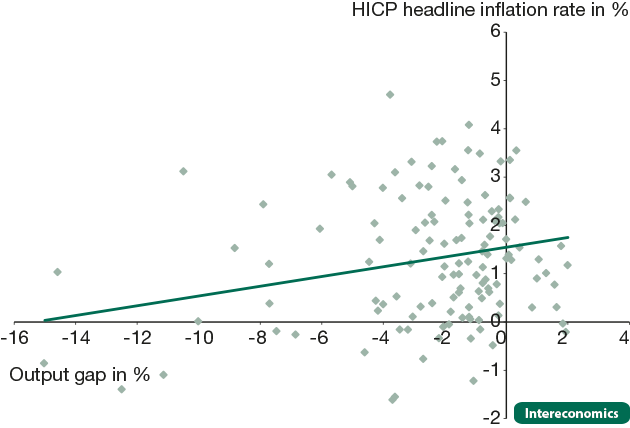 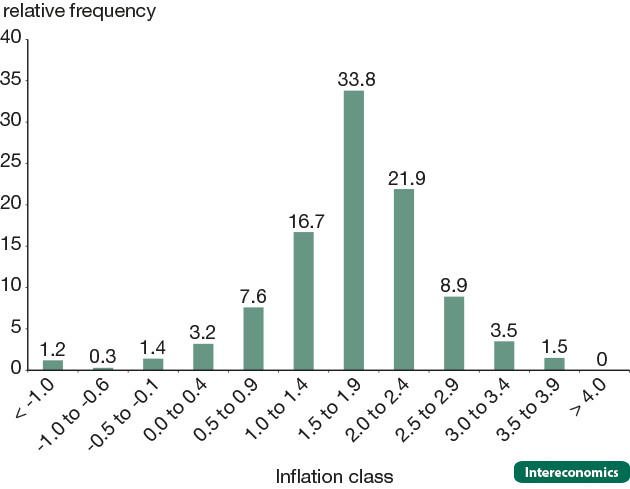 This study makes use of the considerable cross-country and cross-time heterogeneity in terms of inflation rates and capacity utilisation of EMU member states after the Great Recession in order to investigate whether the Phillips Curve has broken down in the post-crisis era. The results point to the conclusion that the Phillips Curve is alive and well in the EMU. Moreover, even after several years of below-target inflation rates, the Phillips Curve seems centred at or just slightly below the ECB’s medium-term inflation target. This result is supported by inflation expectations, which seem well anchored to the ECB’s inflation target as well. Hence, if the economic recovery in the EMU continues, as forecasted by many observers, the ECB can expect the inflation rates to return to their target as the output gap closes.11 Increased oil prices already pushed the headline HICP inflation back to around two percent in early summer of 2018. Calls for a readjustment of the ECB’s inflation target therefore seem unjustified as the below target inflation seems not to have been the result of a structural shift or even breakdown of the Phillips Curve but merely the result of a protracted economic slump. Moreover, the results suggest that the ECB should continue and most likely accelerate the exit from its unconventional monetary policy measures (tapering).