By Gustav A. Horn

This article is part of A New Economic Paradigm

The European Economic and Monetary Union (EMU) was initially conceived under the more or less explicit assumption that market forces would avoid the appearance of bigger imbalances in trade and current accounts between member states. The corresponding political assumption was that there was no need to intervene and correct such imbalances. Under the orthodox paradigm that dominated at the time of the creation of the EMU, a deficit was only possible if a country had lost its competitiveness. In practice, however, the opposite occurred, and historically large imbalances appeared in the first decade of the euro. In 2007, countries like Portugal and Greece had nearly double-digit deficit rates relative to their GDP, while Germany had a surplus of nearly seven per cent. It is widely believed that these imbalances contributed to the euro crisis from 2009 onwards.

The question is, therefore, how to conceive a new paradigm for the eurozone that helps to avoid the appearance of excessive imbalances. The following analysis concentrates on the exceptional case of Germany, which has accumulated a large – and growing – surplus in its current account balance. It may contribute to a new paradigm by defining the instruments necessary to avoid or reduce such surpluses.

How big is Germany’s surplus? 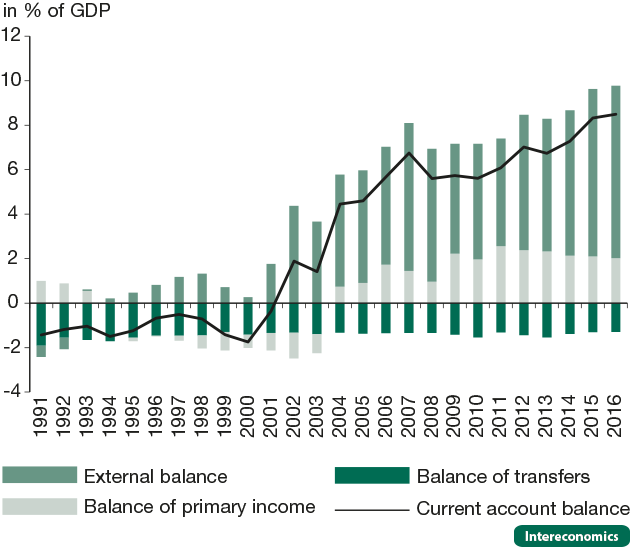 A surplus is not a severe problem according to existing paradigms

For many years, economists did not believe that persistent imbalances would occur in a currency union like the euro area at all.3 However, reality soon proved otherwise. Inflation differences were identified early on as a primary cause.4 These resulted either from persistently differing wage trends or savings behaviour. According to the first argument, labour and unit labour costs have risen more in deficit countries and less in surplus countries than recommendable since the introduction of the euro. “Wage dumping” is said to have boosted German exports thanks to improved price competitiveness, while at the same time curbing private household demand for imports. In turn, a sharp rise in trade and current account surpluses has emerged. For many years, however, this was not seen as a problem, since it was assumed that market forces would reverse wage trends in due time. Deficit countries would face higher unemployment, leading to lower wage settlements, whereas surplus countries like Germany would see a higher wage trend due to better employment performance. It was thought that both tendencies would gradually eliminate deficits and surpluses alike. But this did not happen.

The second theory argues that ageing societies need to save more in order to maintain their income level in the future. Therefore, households will not spend their current income but rather save it – and the financial sector will then invest it abroad. This leads to relatively low imports and a corresponding trade surplus. This is still considered recommendable behaviour and does not, in proponents’ view, imply a stability problem.5 Against this backdrop, it is remarkable that the majority of the surplus increase is attributed to savings at the corporate level rather than the household level; the savings ratio of the latter has remained fairly constant over time.

Still, there is widespread concern about persistent external imbalances within the currency union.6 These imbalances may be the root cause of the debt crisis, as deficit countries’ external debt continues to accumulate. In times of uncertainty, this may result in a sudden stop in foreign investment, eventually leading to a debt default. This could potentially endanger the macroeconomic stability of the entire currency area.

How did Germany’s surplus evolve?

Deficits must be matched by surpluses. How did these surpluses emerge – especially in Germany? Wages in Germany did indeed go through a period of particularly weak growth after the turn of the millennium and only began to grow steadily after the financial crisis of 2008-09. Over the years, low wage and price increases in Germany amounted to a currency devaluation in real terms against the other eurozone countries and led to a continuous improvement in the German economy’s price competitiveness relative to its fellow eurozone members. This has been exacerbated in recent years due to the pronounced weakness of the euro via the exchange rate channel.

In addition to wage development, the high savings rate remains a major reason for Germany’s surplus.7 But as the IMF points out, it is corporate savings that have risen so strongly. This has nothing to do with ageing, but may again be a consequence of weaker wage dynamics.

What can be done to counter the excessive surplus?

This view is overly simplistic. While it is true that a rise in domestic prices relative to prices abroad should lead to a reduction in export volumes and an increase in import volumes, it does not automatically mean that this will result in the decline of current account surpluses. The balance of trade that is part of the current account balance relates to nominal exports and imports of goods – and nominal values are always the product of quantity and price. In other words, changes in the balance of trade are determined by both quantity and price movements in foreign trade.

Therefore, the focus should be on the determinants of German net exports. Figure 2 shows that these are determined by several complex economic interdependencies. Exports are affected by foreign demand, while imports are affected by domestic demand. Both of these variables are driven by a variety of different factors. 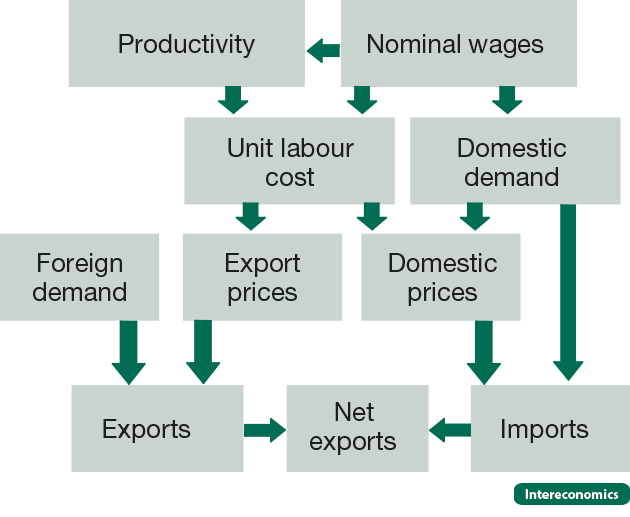 Several economists have recently highlighted the fact that differences in domestic and foreign growth rates play an important role in generating trade and current account imbalances. Particularly in Germany’s case, some claim that low levels of imports are chiefly responsible for the foreign trade surplus.9

Many authors view the mechanism whereby changes in price competitiveness produce changes in export and import volumes not only as the main instigator of current account imbalances, but also as the key to reducing them.10 Given that the current account is a nominal concept, this may prove difficult if not impossible.

The effects of changes in domestic price levels on the balance of trade is twofold: a change in relative prices causes an adjustment in export and import volumes and also has a direct impact on export prices. Consequently, in a scenario where a rise in domestic price levels is followed by a rise in export prices, the export volume will indeed fall (quantity effect), but the higher export prices will increase the export value (price effect). To make things more complicated, many exports require previous imports, such as raw materials. Hence, a reduction in exports also reduces imports to a certain extent.

Since the quantity and price effects pull in opposite directions, it is impossible to know in advance whether nominal exports will go up or down. This depends on the relative strength of the two effects. If the quantity effect is stronger than the price effect, export values will go down when prices go up. However, if the price effect is stronger than the quantity effect, export values will increase. How export values respond depends on whether export demand is price elastic or price inelastic. In the German example, export demand tends to be price inelastic.11 Thus, simply increasing wages would not be sufficient to reduce the current account surplus.

Nevertheless, it is obvious that wages as well as domestic demand in general play a major role in determining external imbalances. They may have opposing nominal and real effects, however. Both need to be taken into consideration.12

Higher wages have a clear impact on real exports and imports. Export volumes fall and import volumes rise relative to the baseline, leading to a decline in real net exports compared to the baseline. However, this decline is much too small to compensate price movements and to meet the requirements of the EU’s macroeconomic imbalance procedure.

Alternatively, a more expansionary fiscal policy could be recommended. While this strategy does not affect export values significantantly, the marked increase in the value of imports that it creates reduces the surplus more effectively than the wage strategy. This also falls short of MIP requirements, however.

The combination of higher real wages with an expansionary fiscal policy is more promising – and it is possible to achieve without a higher debt burden. A wage strategy that follows a productivity path generates increased tax revenue compared to lower pay raises. These additional revenues could be used for increased public spending, preferably on investment. Combining higher wages with higher public spending promises to significantly reduce the net export surplus and, eventually, to meet EU requirements.

In order to avoid the emergence of imbalances in the first place, a new policy paradigm should be developed. What is needed – at least within the euro area – is a benchmark for wage development that should be in line with the ECB inflation target. There must be well-defined policy recommendations regarding recourse for the persistent violation of benchmarks. An appropriate fiscal policy strategy also needs to be developed.