A high degree of correlation among the business cycles of individual countries is usually seen as a key criterion for an optimum currency area. However, the elasticity with which countries react to the common cycle is equally important. A country with a non-unitary growth elasticity relative to the common area will experience cyclical divergences at the peak and trough of the common cycle. Despite being characterised by highly correlated business cycles, the euro area suffers from widely differing amplitudes.

Does the euro area constitute an optimum currency area (OCA)?1 There is a vast body of literature on business cycle synchronisation as a key OCA criterion.2 However, most studies have focused on co-movements in the cycle as a measure of synchronisation. This focus can be misleading if the amplitudes of the cycle are very different, as illustrated in Figure 1, which shows two countries sharing the same (highly stylised) business cycle, but whose amplitudes differ significantly. This leads to two implications: the two series have a correlation coefficient of 1, but large differences appear at the peak and trough of the cycle. These differences can lead to the same types of common policymaking problems as if the two cycles were not correlated, as the high beta country B would need higher interest rates at the peak (and lower ones at the trough) of the cycle than country A. The divergence created by different amplitudes thus appears mostly at the extremes of the cycle. 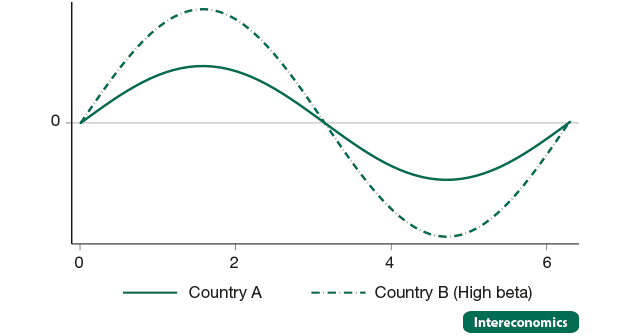 Notes: This figure shows stylised business cycles for countries A and B. The business cycles are synchronous, with country B having an amplitude that is twice as large as that of country A.

Consequently, these considerations suggest that the emphasis on correlations that is prevalent in the literature is sensible only if countries have cycles that do not coincide but have similar amplitudes (and lengths). Figure 2 depicts the case of two countries whose shifted cycles have a correlation coefficient of zero. In this case, the differences in the cyclical positions remain constant for a long period between the peak of one cycle and the trough of the other, but then go to zero and change sign.

Notes: This figure shows stylised business cycles for countries A and C that have the same amplitude but are uncorrelated.

A comparison between these two figures provides a possibility to discriminate between the two hypotheses: if differences in amplitude are the real problem, large divergences should appear mainly at the peak and trough of the cycle. By contrast, if the problem is the shift in business cycles, then the divergences in cyclical positions should persist for most of the time. Judging from the way the policy discussion has evolved over time, one can conclude that different amplitudes might indeed have been a key factor, since differences in cyclical positions seem to play a smaller role today than they did at the peak of the crisis. 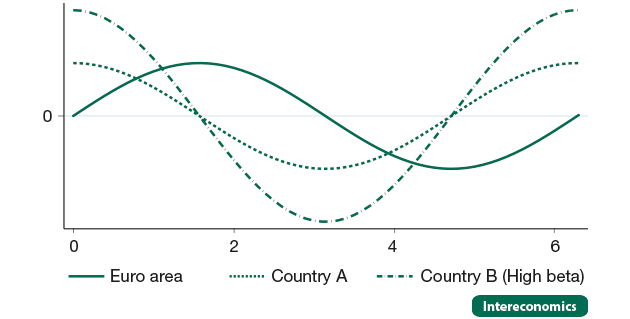 We use the volatility of business cycles, proxied by the standard deviation of the cyclical component of real output (GDP) at the national level, as a first measure to illustrate country-specific amplitudes in the euro area. We start with the following question: Has there been a convergence in the amplitude of business cycles, as measured by their overall volatility?3 Following the literature, we rely on the HP filter for the trend-cycle decomposition. We split the sample between two periods, the early phase of the euro (1999Q1-2007Q4) and the crisis period (2008Q1-2015Q4), to measure the impact of the euro crisis. Furthermore, we also provide the standard deviation for the whole period from 1999Q1 to 2015Q4. The results are depicted in Figure 4. We group the countries into core (those without financial distress in 2011-12), periphery and non-euro area countries.

The overall picture that emerges from Figure 4 is that there are large differences in the amplitudes of business cycles across countries; however, these differences do not reflect a core-periphery split (the aggregate values depicted in the figure are very similar). The “Great Moderation” is apparent if one considers the first period after the introduction of the euro. By comparing the second and third bars, one sees that the business cycle amplitudes clearly increased with the crisis, but the increase is proportionally contained (usually around 20-30% of the pre-crisis value).

Standard deviations of output gap, in % 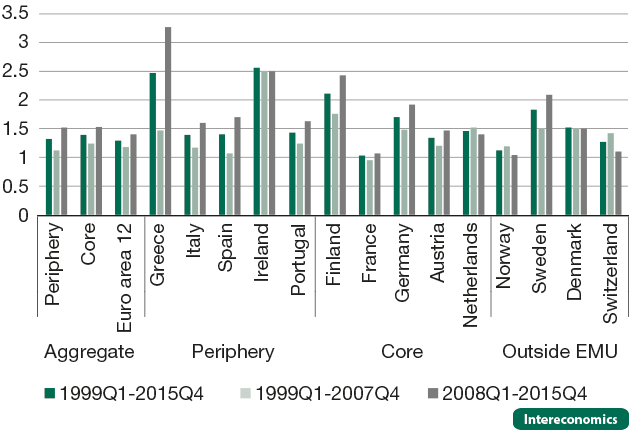 Greece, of course, is an outlier, but for another crisis-hit country – Ireland – one sees no change in the amplitude of the cycle. Whereas France shows the lowest variation, the Netherlands, Finland and, surprisingly, Germany stand out among the core countries for their large increases.

The more relevant question for the functioning of the euro area is whether national cycles of individual countries react differently to the aggregate euro area cycle. In other words, do they exhibit different “betas”? To measure these betas, we ran some simple regressions in which we explained the national cyclical component of growth only by the common euro area cycle.4

The results are shown in Figures 5 and 6.5

Figure 5 shows that most national cycles are tightly linked to the euro area’s cycle, as the R-squared, i.e. the proportion of the variability of the national cycle that can be explained by the common euro area cycle, is generally greater than two-thirds. Greece is the one clear exception, in that the common cycle seems to be irrelevant for the country. The figure shows that the common cycle has a somewhat lower explanatory power for Portugal as well, but it still remains highly relevant. The countries belonging to the core show a somewhat tighter correlation, with an R-squared generally above 80%, while lower values prevail among the peripheral countries.

Figure 5
How important is the common cycle for the national cycle: R2 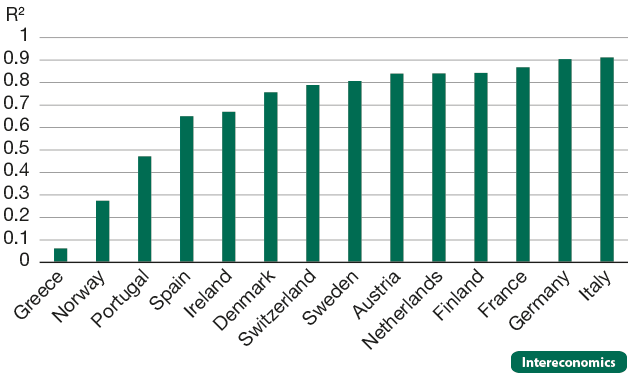 Note: R2 corresponds to the same regression equation explained in footnote 4 and the betas in Figure 6.

The beta coefficients are in general quite precisely estimated. In six of the 14 countries, the estimated coefficient is more than two standard deviations away from 1. Thus, one could argue that for these countries the OCA criterion is not fulfilled, despite the high correlations found above. Moreover, even within the core (generally considered a rather homogenous group), we find that there are large and statistically significant differences. For example, France’s beta of 0.74 is roughly only half as large as Germany’s (1.25). Consequently, if the common cycle shows an output gap of 2.0%, that of France (compared to its own cycle) would be 1.48%, whereas that of Germany would be 2.5%. Therefore, very large cyclical positions might be the result of strong common upswings or downturns. The null hypothesis that the beta is equal to 1 can be rejected for three of the core countries. We also find pronounced differences within the periphery, with Spain having a beta of 0.87, compared to 1.63 for Ireland. Italy is the only large country with a point estimate of its beta almost exactly equal to one.6

Somewhat surprisingly, Belke et al.7 also find that the business cycles of most non-EMU European countries are as tightly linked to that of the euro area as those of the average EMU member. With the exception of Norway (which perhaps, given the importance of oil and gas, is more closely synchronised with the global economy), the R-squared lies between 0.75 and 0.80.

Figure 6
Contemporaneous effect of the euro area cycle on the national cycle: Betas 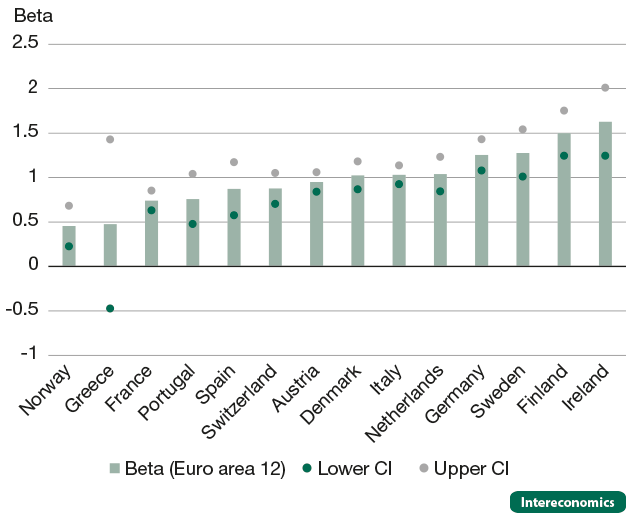 Notes: Dependent variable is the quarterly (HP-filtered) cyclical component of each peripheral country. The sample runs from 1999Q1 to 2015Q4. The coefficients are statistically significant at the 1% level for all countries but Greece, whose coefficient is not significant at any conventional level. Upper CI and lower CI refer to the 95% confidence interval. 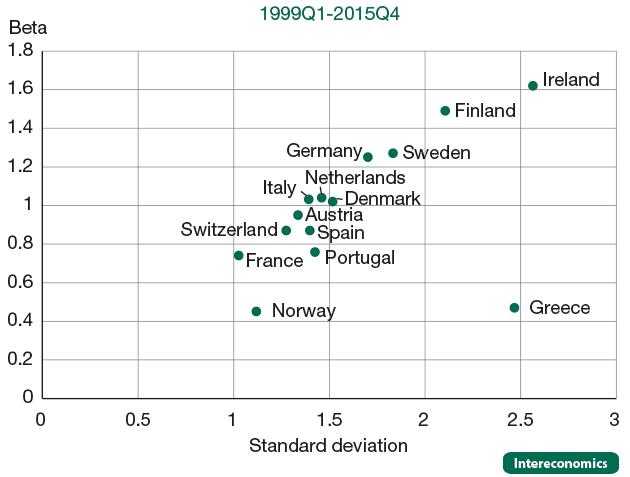 Notes: The scatterplot shows the standard deviation of the output gap from Figure 4 against the beta from regressions in Figure 5 (1999Q1-2015Q4). Similar data for the sub-periods 1999Q1-2007Q4 and 2008Q1-2015Q4 is provided in A. Belke, C. Domnick, D. Gros: Business Cycle Synchronization in the EMU: Core vs. Periphery, in: Open Economies Review, forthcoming.

The amplitudes of the national business cycles are clearly tightly correlated with the beta, or the “elasticity” with which the national cycle reacts to the common one. As before, Greece’s idiosyncratic economic path since the outbreak of the crisis seems to be the only exception. The close correlation between the standard deviation of the national cycles and the estimated beta coefficients point to the fact that the much higher variability observed in some countries was not a consequence of specific policy errors or a divergent national cycle, but rather was due to the structure of their economies and their financial sectors, which seem to make certain economies react much more strongly to the common cycle than others.

The analysis of the pre- and post-crisis sub-periods provided in Belke et al.8 shows that these patterns have not been fundamentally affected by the crisis, although one finds some general decrease in correlation between core and peripheral countries.

Business cycle synchronisation is a key optimum currency area criterion. The standard argument is that membership in a common currency area becomes costly for any country whose national cycle diverges significantly from the common cycle. We find that there is a tight correlation between the common cycle and the national cycle for most EMU member countries. At first sight, it thus appears that, with the exception of Greece (and possibly Portugal), the standard OCA criterion is fulfilled. But our key argument is that it is not sufficient to look at correlation patterns. Countries which share the same business cycle could nevertheless experience quite different cyclical positions and, therefore, require a different monetary policy stance if the amplitude of the cycle is indeed very different. Our results suggest large systematic differences in the amplitude of national cycles and their reactivity to the common cycle, with many countries registering betas that are significantly different from one.

The practical conclusion for the euro area is that the main problem for the ECB might not be a desynchronisation of cycles, for example between the core and the periphery. Instead, a more relevant problem in practice might be that individual countries have cycles that are tightly correlated but of very different amplitudes, thus requiring a different monetary policy stance although they might all be at their peak or trough of the cycle. The more general conclusion is that a high degree of correlation is not a sufficient OCA criterion. Having a beta that is close to one is equally important.